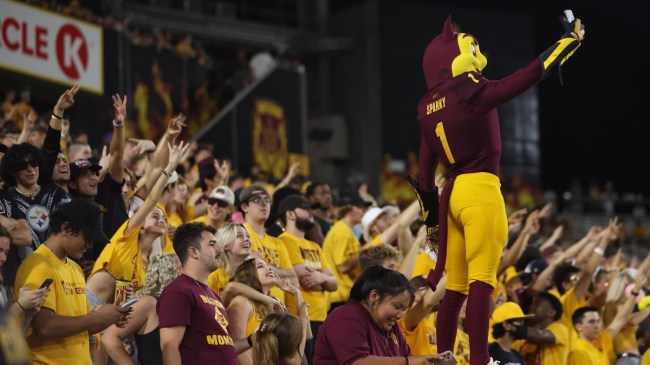 It was thought of as a risky hire when Arizona State hired former NFL Head Coach Herm Edwards entering the 2018 season. He had no college coaching experience aside from a two-year stint at San Jose State coaching defensive backs in the 80s. That meant he had no experience in modern-day recruiting, which could be problematic.

It worked for a while, and Edwards had three winning seasons in his four-plus years. But, amid NCAA investigations into recruiting illegalities and a 1-2 start, he was let go on Sunday after a loss to Eastern Michigan in Week 3.

Now, the Sun Devils need to find a new coach. But, It won’t be easy given the fact that sanctions may be coming.

First off, this is not an encouraging quote if you’re a Sun Devil. It’s what a bad athletic director says when they don’t know exactly what they’re talking about when it comes to football analytics.

Anderson on the new era of college coaching and how ASU may incorporate that in its hiring process: "The ones who are really into analytics and all that data stuff" will be more prominently positioned.

Deion Sanders has not been in serious contention for Power 5 jobs the past few years. But, the Jackson State head coach surely will be a big candidate this year. Arizona State alum and retired NFL player Kerry Taylor thinks Coach Prime is the right way to go.

Anderson on the new era of college coaching and how ASU may incorporate that in its hiring process: "The ones who are really into analytics and all that data stuff" will be more prominently positioned.

This Arizona State fan has more names. But, I don’t think Urban Meyer and Arizona State is a good fit. ASU has a reputation for having good-looking coeds, and I don’t think it would be a good move for a guy who has not been able to keep his hands to himself at many of his coaching stops if you believe the rumors. Ed Orgeron also has a thing for younger women. Mullen is a proven winner, but I’m not sure he’d recruit hard enough at Arizona State to win.

Two names I’d go get but I’m not sure Arizona State wants that smoke.

The safer play would be Dan Mullen.

National writers are coming up with people they think are good fits.

Chris Vanini of The Athletic throws out some interesting names here. Kliff Kingsbury makes a ton of sense, actually. Sitake doesn’t as BYU is the better program and it’s moving to the better conference in the Big 12. But, to me, the best of the bunch is Tom Herman.

Would Kalani Sitake be interested? Could Bronco Mendenhall, Dan Mullen or Tom Herman come back into coaching? The local kid Kenny Dillingham? What if Kliff Kingsbury gets fired?

ESPN’s Pete Thamel is also throwing out names. Of these, Army’s Todd Monken interests me the most, because I love option football. That may not be appealing to Arizona State, though, and it makes recruiting on both sides of the ball tough.

But, it’s only September and the Sun Devils will have a lot of time to figure out who they want to lead their program. It will be an interesting coaching search given the potential sanctions coming.