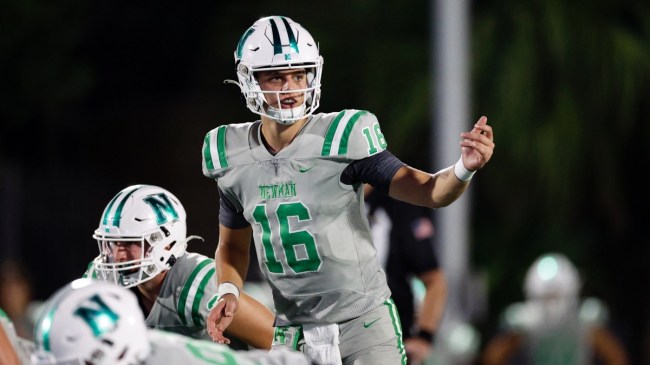 By now, we’ve all heard of Arch Manning. But, if you’ve been living under a rock, he’s the grandson of Archie Manning, nephew of Peyton and Eli, and son of Cooper. And, he can really sling the football. He’s the consensus top player and quarterback in the class of 2023. The Isadore Newman (LA) product committed to Texas in the Summer. And, his every throw in high school is scrutinized.

Manning, who chose Texas over his other finalists, Alabama and Georgia, will likely start next year sitting behind Texas quarterback Quinn Ewers. But, he had one last big decision to make regarding his college future, and he’s made it.

Manning will enroll early at Texas this Spring

In a move many expected, it’s been reported that Manning will enroll for the Spring semester in Austin to get a head start on the season. This is according to Rivals.com writer Anwar Richardson.

This shouldn't come as a surprise but future Longhorn QB Arch Manning has decided to early enroll in January. Arch heavily considered delaying his enrollment & defending his team's state basketball title but is eager to learn from Steve Sarkisian & join his teammates in 2023. pic.twitter.com/0fd6uTaR35

This is the norm for most quarterbacks now. As the stakes get higher and higher, coaches want players in the program as soon as possible. It’s not surprising that someone from the football-obsessed Manning family would choose to do this.

And, Longhorn fans are excited.

Some think he can even give Ewers, who was the top recruit in the country himself, a run for his money. I’m not buying it, and I think Ewers will be an excellent player next year.

He sees an opportunity to take the starting job and I'm here for it !!!