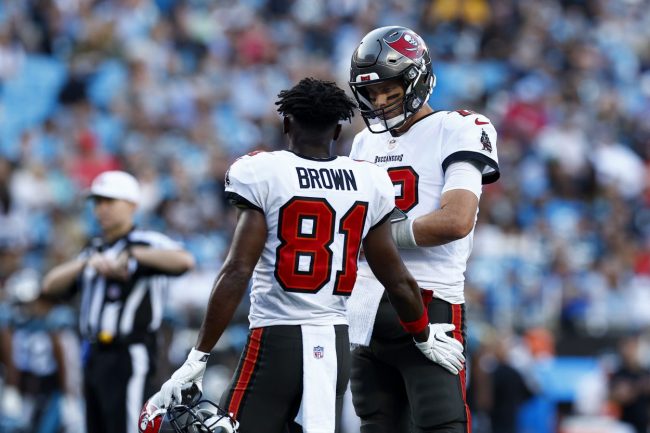 Nobody marches to the beat of their own drum quite like former All-Pro NFL wide receiver Antonio Brown. Brown’s storied NFL career, in which he made seven Pro Bowls and put of Hall of Fame caliber numbers, is overshadowed only by his behavior off the field.

Brown has a laundry list of off-field incidents that marred his impressive playing career. From beating up a moving truck driver, to alleged sexual assault and melting down mid-game while quitting football, Brown’s off-field legacy far outweighs his on-field one.

Brown, however, doesn’t and has never seen it that way. Instead he’s maintained that he a victim. That he has been unfairly scrutinized and picked on. That includes blaming media for his feud with Pittsburgh Steelers wideout JuJu Smith-Schuster.

The enigmatic wide receiver put himself back in the news on Wednesday morning with a tweet calling out the Tampa Bay Buccaneers and Tom Brady.

Now u see the difference

Put that Shit on

Brady is currently away from the Buccaneers while dealing with unspecified “personal issues.” Ben Volin, a senior NFL Writer for the Boston Globe, said recently that he was concerned by Brady’s body language in practices.

Some fans agreed with Brown.

But most just found his comments laughable.

I wouldn’t trust nobody who walked outside like this https://t.co/PA9nCPBbxx pic.twitter.com/A5W3mJzBX6

Homie put the phone down https://t.co/86ojJiJ8dk

That man gave you a chance when nobody else did 🤡 https://t.co/folR5DzC7E

Brown and Brady played parts of two seasons together, including a victory over the Kansas City Chiefs in Super Bowl 55. Brady even allowed the troubled to star to live with him according to reports.

It appears that Brown is once again ready to burn another bridge. Though it’s hard to imagine this is a battle that he can win.