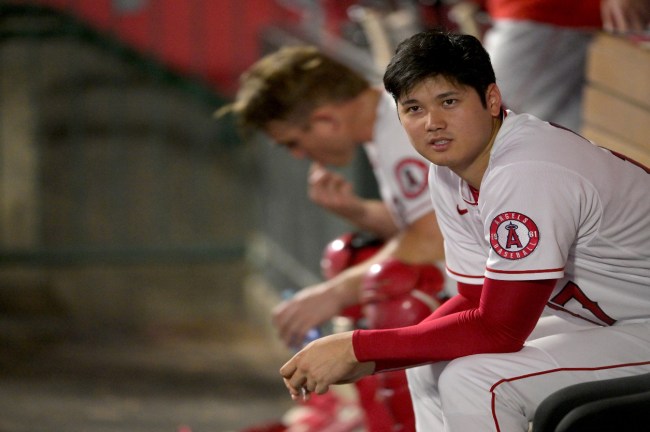 The MLB Trade Deadline is almost here, and Washington Nationals superstar Juan Soto is easily the most prominent name available.

A report came out on Thursday that the Los Angeles Angels are listening to trade offers for everybody, including sensational pitcher/hitter Shohei Ohtani.

Here’s the report from Joel Sherman and Jon Heyman of The New York Post:

The Angels, perhaps for the first time, are listening to trade offers for Shohei Ohtani…Teams have been calling regarding potential deals for the two-way phenom, and while a trade involving the unique superstar is seen as very unlikely, the Angels are not hanging up the phone.

There you have it. The Angels are open to offers, and that would be a monster package to acquire Shohei Ohtani.

Of course, this spread quickly, and Ohtani was asked about his future after the game on Thursday. What’s interesting is how Ohtani phrased it (h/t Sam Blum of The Athletic).

“I’m with the Angels right now, and I’m very thankful for what they’ve done. I love my team and my teammates. Right now I’m an Angel, and that’s all I can focus on.”

That isn’t what Angels fans wanted to hear. While the rumors are one thing, Ohtani’s comments bring another question to the table. Does he want to stay with them? Or does he want to go elsewhere?

“I’m with the Angels right now. And I’m very thankful for what they’ve done.”

He is bolting as soon as he can, he’s just too polite to say it aloud.

Ohtani didn’t answer the question of if he wanted to be here or not—just that he’s thankful and that he loved his team/teammates…a subtle way to let us know that he won’t be re-signing.

However you want to take Ohtani’s comments is up to you. But, the future is murky for the generational talent. We have seen Ohtani shatter plenty of unbreakable records, and it will cost an enormous amount to land him.

For now, we wait and see.