Angel Hernandez Is Back With Yet Another Horrendous Call, Except This Time He Wasn’t Behind The Plate 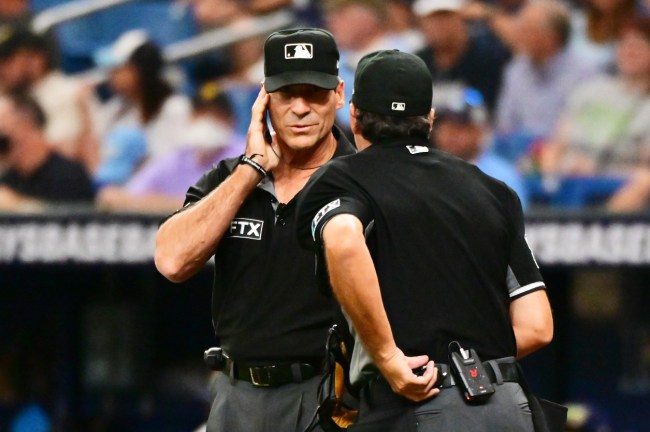 The MLB umpiring issue has been a very hot topic and conversation. Commissioner Rob Manfred does plan on introducing robot umps in the 2024 season, and quite frankly, it’s about time.

Things have been terrible, and we have seen a few different horrible umpiring shows. First, it was Hunter Wendelstedt, although Doug Eddings was far and away the worst of the season thus far.

But, Friday game us another chapter of the Angel Hernandez Show. The only difference is this time, Hernandez wasn’t behind the plate.

In the ninth inning of the Texas Rangers-Minnesota Twins game, Byron Buxton hit a hard ground ball down the third-base line.

And the rest is history.

Angel Hernandez calls a ball foul that clearly bounced on the chalk on replay pic.twitter.com/5nJW1XE87A

The ball hitting the chalk is clear as day, and even the third baseman and shortstop were shocked at the foul call.

Instead of Buxton being safe at first, he headed back to home plate and eventually struck out swinging. What makes things worse is the Twins were down one, so who knows if the result changed or not.

The reactions were priceless, and the fact that this play isn’t reviewable is another thing the MLB needs to change.

Another blown call by this guy. This should have been reviewable. MLB, do better. https://t.co/UyVb1uy9X9

I’m convinced he is doing this on purpose. No other explanation. https://t.co/K6RW1tlbny

This man needs to be investigated and FIRED https://t.co/wZb3zjINzN

Either make #AngelHernandez get glasses🤓
-or-
retire him as an #Umpire https://t.co/9dLucTxbzQ

Angel Hernandez just keeps making mistakes, and he might not want to check social media for quite some time.