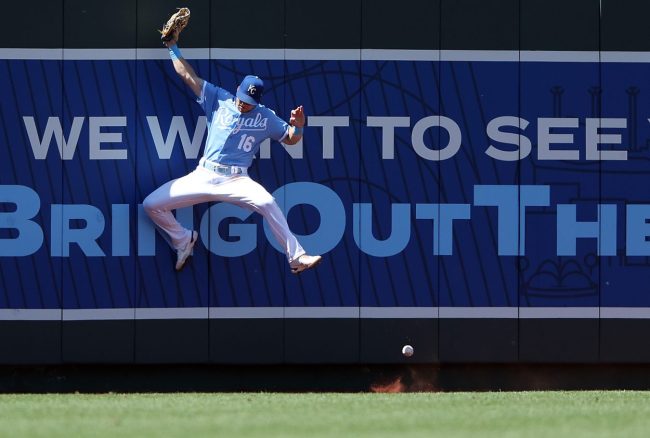 Yankees fans are rejoicing Thursday morning, but maybe not for the reason you’d expect.

The New York Yankees are finalizing a deal to acquire outfielder Andrew Benintendi from Kansas City, sources tell ESPN. Three minor leaguers will be headed back to the Royals.

Benintendi, who began his career with the Boston Red Sox before joining the Royals in 2021, is having a career-best season to this point. The American League All-Star is batting .320 with 39 RBIs and 40 runs scored. While his power numbers are down from his time in Boston, they should spike in a more hitter-friendly park. Benintendi is also an elite fielder, having won a Gold Glove Award just last year.

Obviously, Yankees fans are pretty fired about the acquisition.

WE GOT NINTENDO THATS WASSUP NOW GET CASTILLO AND SHORE UP THE BP @CASHMAN ALSO SIGN SOTO & JUDGE TO OBSCENE DEALS IDC ABOUT POSITIONS SPEND BIG MONEY UR NOT POPPED GUYS https://t.co/wAdcfrgOLz

But that wasn’t the only reason Yankees fans were excited. In fact, it wasn’t even that the primary reason.

Joey Gallo has been bad for New York this season. Really, really bad. Through 80 games played and 270 plate appearances, Gallo is hitting a measly .161. Gallo has been so bad that he caused New York radio host Don La Greca to absolutely lose his mind trying to defend him.

But now that appears to be over. With Benintendi in the fold, at-bats for Gallo are likely to be few and far between. And its not like his glove was what’s keeping him in the lineup. Gallo has been a significantly worse than average player in the field this season according to FanGraphs.

So as you can imagine, Yankees fans are pretty excited to have likely seen the last of him.

Gallo is finally on the bench or gone thank the lord https://t.co/hXegL0aaXs

Not having to bat Gallo man. We finally made it

Sleep well, Yankees fans. Your long-lasting nightmare is finally over.