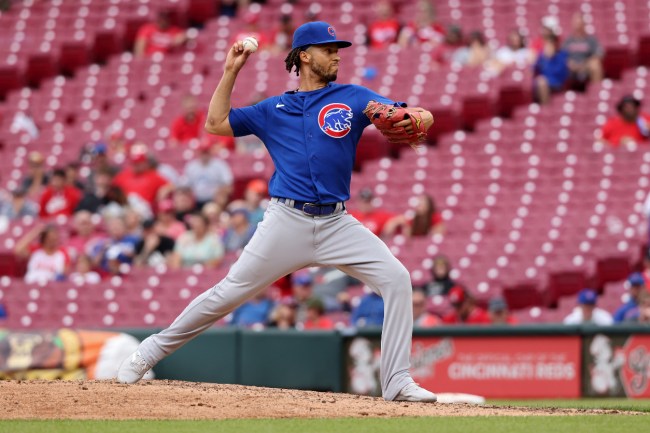 It was a terrific night for the Cincinnati Reds for once. At the bottom of the eighth inning, the Reds had a massive 15-5 lead over the Chicago Cubs. So, the Cubs sent out shortstop Andrelton Simmons to the mound to save the arms of the bullpen with the game out of sight.

Another position player was pitching, and Simmons threw one inning, giving up five runs on five hits and a walk. But, Simmons’ performance quickly went viral after a series of unbelievable pitches.

Where do we even begin? How about the 45 MPH swing and miss.

Right after that, he nearly hit Kyle Farmer in the head, and the overlay is something we might never see again.

That is something else indeed.

Yadier Molina also pitched this week, although his performance wasn’t as viral as Simmons’. Nonetheless, the Cubs shortstop playing pitcher brought about a mixed reaction from the fans.

Thats me playing slowpitch softball for the first time after playing baseball for over 10 years. My eyes light up at the pitch but swing and miss.

Others weren’t too thrilled and are tired of seeing position players take the mound, although the new rule change should eliminate some of this.

I wish position players would act like they’ve thrown a ball before when they get on the mound, because unless it’s someone like Yadi or Punils, it’s really boring to watch anymore.

We’re unlikely to get fewer position players pitching when (if?) they enforce the 13 pitcher cap, now pushed back again until June 20.

The performance from Simmons was marvelous, and even though the Reds won by a score of 20-5, Farmer’s swing and miss made history — it was the slowest swinging strike ever recorded in an MLB game.

Simmons will remember this for the rest of his life, and it ironically came on his first-ever time pitching in the majors.