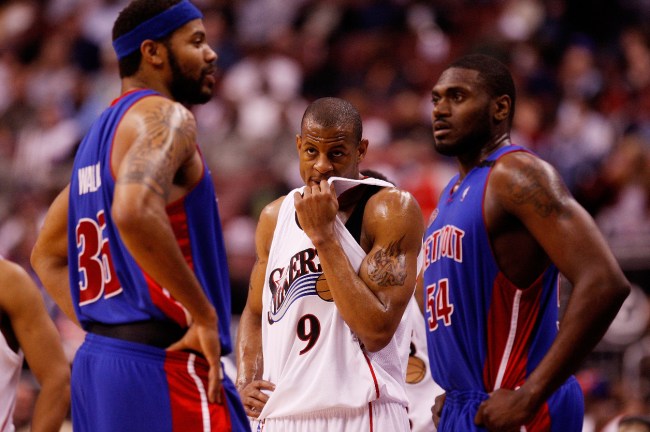 But, this time, it is NBA veteran Andre Iguodala. Iggy is fresh off another NBA Finals victory after the Golden State Warriors defeated the Boston Celtics.

Iggy is having a terrific time, but this latest take might be one that he regrets saying publicly. While hopping on The Dan Le Batard Show with Stugotz, Iguodala raved about former Detroit Pistons star Rasheed Wallace.

Here you go. Sit back and enjoy!

Iguodala covered quite a bit of topics, but the Wallace nugget is the most controversial one. Here’s what Iguodala said:

“If Rasheed Wallace played in modern-day basketball, if he played in our league today, he’d be a top-five player. He’d be better than Giannis and I love Giannis.”

If he played in today’s NBA, Rasheed Wallace would be better than Giannis Antetokounmpo.

It’s safe to say that is quite the take from Iguodala, and this one will be discussed at great lengths.

Wallace was a terrific player during his time. He averaged 14.4 points in his career and made the All-Star team four times while winning the NBA title in 2004 with Detroit. He was a key member of that nasty Detroit team.

But, better than Giannis?!?!? That is a hot take of all hot takes, but Iguodala is standing firm in his evaluation. But NBA fans aren’t exactly on board with this.

Smh. Anything for attention. https://t.co/2PZMqwRUMR

iggy be saying some weird stuff like this is a ridiculous take. he said kyrie was top 20 too lmao https://t.co/lfJtHDq9B9

Sheed would be GREAT in this era… better than Giannis is a reach https://t.co/s5Dz3V02Sb

Sheed was nice. But still I've never seen nobody get disrespected the way Giannis does by the previous generations and media https://t.co/6Dw4HIfhXC

The era and game of basketball are much different than 20 years ago, so it is hard to compare. But yikes. Rasheed Wallace over Giannis? That’s a bold claim.