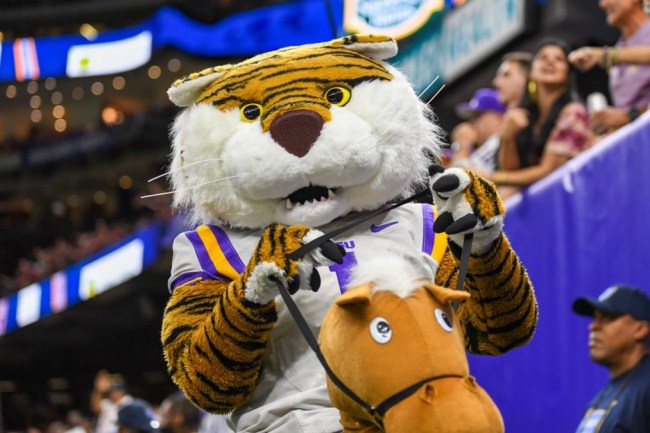 We all know that things can get wild in Baton Rogue on LSU game day. It’s one of the best tailgating scenes in America and things always get rowdy.  Naturally, people are drinking a lot, and that can lead to people doing some pretty crazy stuff. Sometimes, that’s a keg stand or regrettable dancing made into  a Tiktok. For one Tiger fan, it was much, much more.

It’s an incredible clip and is a lot different than most of the videos of field invasions we see. Him just standing there, watching the play, is an incredible scene against the backdrop of the Death Valley crowd. For a while, it seemed like nobody saw the trespasser. But, he was ultimately tackled in a moment he and many in attendance at Tiger Stadium will not soon forget.

As always, the internet had its laughs at this LSU fan

I’m sure if this joke is more about the drinking culture of LSU or their not-super-stellar academic reputation.

Guy’s BAC is higher than his GPA. https://t.co/pgR04b3EYM

@Mannkpolo was not impressed. He thinks that this was just an elaborate troll job and he appears to be sick of it.

Troll culture has cooked our society to the bone https://t.co/ljSZhbPjTC

Finally, we have some good social commentary.

the effort to legalize mushrooms took a few steps back with this guy unfortunately lol https://t.co/L7N7mc3iOS

LSU blew Southern out Saturday, but I suspect most fans will talk about this more than anything.