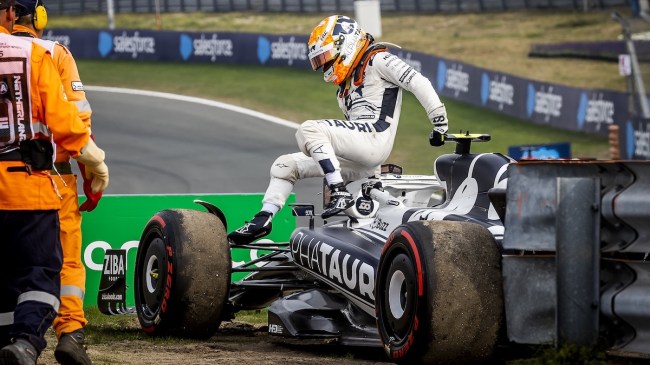 Red Bull and Max Verstappen are pulling away in the race for the 2022 F1 World Championship, but that hasn’t stopped cheating conspiracy theories from formulating after the Dutch Grand Prix.

The recent drama began when AlphaTauri’s Yuki Tsunoda had his race cut short in a rather strange way on Sunday. Following a pitstop on lap 44, the Japanese driver claimed his tires weren’t fitted properly and pulled to the side of the track.

It appeared Tsunoda was ready to abandon the race, but his engineers saw no issues and instructed him to circle back for another tire change. However, shortly after leaving the pit box again, the same issues persisted and Tsunoda was forced to retire his car.

Tsunoda comes back in to the pits for running repairs before coming out again and immediately encountering problems again. He's parked up at the side of the track.

Tsunoda exited the pitlane before pulling over to the side of the track and a virtual safety car followed. Verstappen, who was leading the race, benefitted by taking a shortened second pit stop.

The VSC had the opposite effect on Mercedes’ Lewis Hamilton and George Russell, who likely would’ve finished the race without an extra stop. Even Mercedes boss Toto Wolff thought the confusing incident was worth further investigation.

“If we were fighting for the championship, that would be something I would look closely at… That probably has changed the outcome of the race that we maybe could have won.”

The incident was certainly strange, but Tsunoda was only handed a penalty for loosening his seat belt. While the FIA’s investigation concluded that AlphaTauri had reacted as best as it could, it didn’t stop social media from taking off with the conspiracy theories.

With some fans still hung up on Verstappen’s controversial win to end the 2021 season, Wolff’s comments fanned the flames. New conspiracy theories suggested that Red Bull and AlphaTauri had orchestrated Tsunoda’s retirement from the Dutch Grand Prix to help Verstappen win.

The AlphaTauri F1 team released a statement on Monday after Red Bull’s chief strategist, Hannah Schmitz, became the target of online abuse. Upset fans believed she was the mastermind behind the confusing events.

AlphaTauri slammed the “hateful behavior” displayed and denied all accusations of foul play. The team insists they compete independently from Red Bull and any insinuation otherwise is flat-out false.

“Yuki had a failure that the team didn’t immediately detect which caused him to stop on track. To suggest anything different is insulting and categorically incorrect.”

The FIA later concluded that an issue with the car differential caused the stoppage. Hence why Tsunoda felt as if his tires weren’t properly attached. However, he will serve a 10-place grid penalty at the Italian Grand Prix for loosening his seatbelt midrace.

Ultimately, these conspiracy theories hold no truth. The idea that Tsunoda would sabotage his own race to help Verstappen is ridiculous. Team orders might exist, but the two aren’t actually teammates.

Plus, Verstappen has displayed dominance throughout the season and currently leads the F1 Drivers Standings by 100+ points. So a different result at the Dutch Grand Prix wouldn’t affect much anyways.