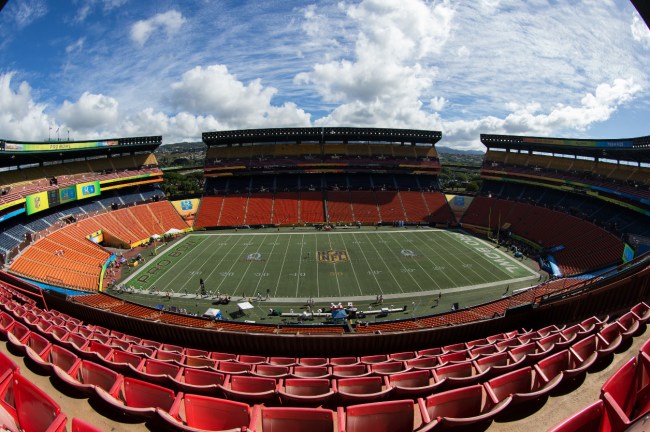 For years, the home of the Pro Bowl was Aloha Stadium in Hawaii — the home field of the Rainbow Warriors. Then, the NFL decided to shift the Pro Bowl to Orlando, then to Las Vegas, and now there have been talks of the Pro Bowl being done away with altogether.

Anyways, Aloha Stadium is going to look much different very soon. According to Doug Greenberg of Front Office Sports, the stadium is getting a tremendous $400 million facelift. More than that, the stadium area will include real estate, an entertainment district, and so much more.

Hawaii's Aloha Stadium is getting a massive facelift as part of a $400 million revitalization of the iconic home of the Rainbow Warriors and Pro Bowl.

The project will include an entertainment district and real estate.@DougGreenberg has more details ⤵️

As Greenberg states, the stadium’s capacity will reduce to 35,000, but that’s just fine. The Rainbow Warriors rarely sell out games, and a 6-7 record in 2022 didn’t help the cause. Here are some features the stadium area will include:

But, this new stadium will be quite something. The Washington Commanders also revealed a new stadium pitch that will feature a ton of luxuries around the stadium itself. But, that one is a $3 billion project — although NFL compared to college is a massive difference.

Could this proposal be a way to get the NFL to bring the Pro Bowl back to the Islands? Greenberg didn’t count that out.

Aloha Stadium was also famously the home of the NFL’s Pro Bowl almost every year from 1979 through 2016. It hasn’t been played there since. A vibrant new entertainment district could be just the ticket to lure the NFL back.

Perhaps the $400 million renovations will send the NFL into considering sending the game back. After all, it sure seemed like players, coaches, and everybody else involved preferred Hawaii rather than the other locations.