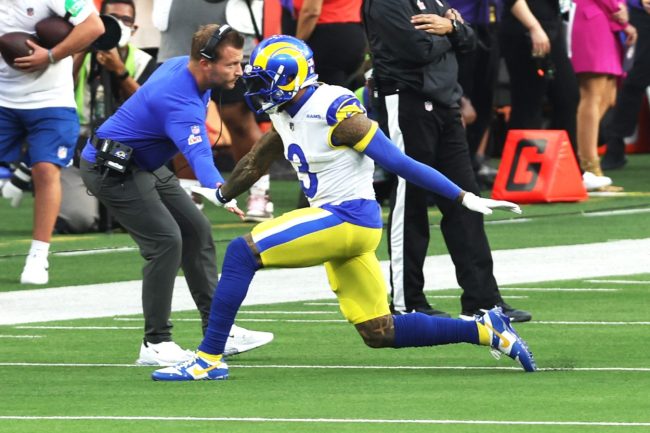 Odell Beckham Jr. grew up as a huge fan of Philadelphia 76ers superstar Allen Iverson. Like, a really, really big fan. So much so that Beckham opted to wear Iverson’s No. 3 and get a picture of his iconic NBA Finals stepover tattooed on his leg.

Dawg the detail on @OBJ_3’s leg tattoo sleeve is too crazy. He even got the Iverson step-over 🔥 pic.twitter.com/BcvU1BK27b

And who could blame him? Iverson is not only the 2001 NBA MVP, but he also helped redefine the game and basketball culture. As it turns out, Iverson is now a pretty big fan of Beckham Jr. in his own right. To show this, the NBA Hall of Fame inductee showed up to a Beckham Jr. autograph signing and had him personally signed a poster for him.

OBJ posted a video of the interaction on his personal TikTok account with the message “Humbling moment when u realize ur idol is also a fan.”

Allen Iverson laid the groundwork for the culture, and OBJ has been showing the respect back by donning the number 3 🙌

Initially, one of the people working the signing took away the poster to try to get Iverson a better copy after the marker OBJ was using to sign seemingly stopped working. Instead, Iverson said he wanted to keep the originally copy, saying “that’s the realness of it, man.”

The final message from Beckham to Iverson read: “To: The Goat. OBJ. The reason I wear #3. Love you!!!”

It’s a touching moment for both Iverson and the superstar wide receiver, who is working his way back from a torn ACL suffered in the Super Bowl with the Los Angeles Rams. Beckham Jr. is still a free agent and could yet provide a spark for teams looking for a bit of pop at the wide receiver position.