Baseball Fans Aren’t Sure How To Feel After Albert Pujols, Miguel Cabrera Get Honorary All-Star Bids 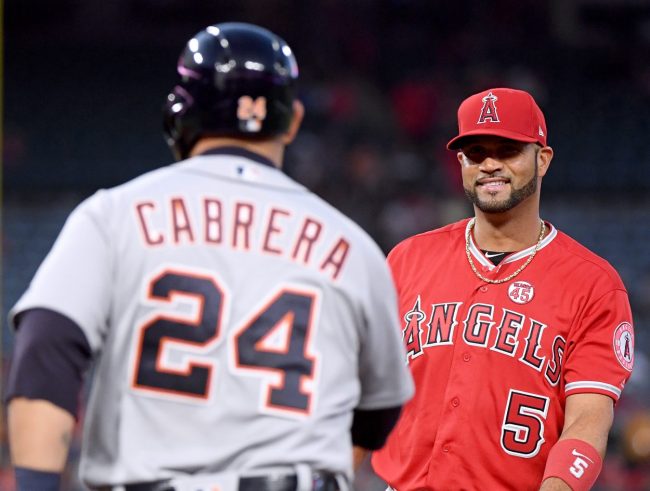 The duo has combined for nearly 1,200 home runs in their respective careers and a grand total of 4,003 career RBI. But neither has had a particularly impressive 2022 season. Which isn’t unsurprising, considering Pujols is 42 years old and Cabrera 39. But that’s what’s got baseball fans so conflicted after both were named honorary MLB All-Stars by commissioner Rob Manfred.

Official: Albert Pujols and Miguel Cabrera will play in the All-Star Game, per MLB announcement. Wrote about new clause in CBA that allows their additions, without anyone losing their spots, earlier this week. https://t.co/z3KYEhqwBt

So far this season, Cabrera has been solid with a .308 average, 31 RBI and three home runs in 70 games. But Pujols has been downright unplayable. He’s batting just .200 with four homers and 18 RBI in 45 games played. The pair is very clearly going in due to prior accolades. Which makes sense for Pujols, who is retiring at the end of the year. But Cabrera is expected to play through the end of his contract in 2023.

The new Major League Baseball collective bargaining agreement allows for their inclusion. But not every fan seemed to think they deserved the honor. A number of baseball fans felt the inclusions lessened the prestige of the All-Star Game.

Not a fan of this. They will get their due accolades as they get into the HOF. Keep the rosters for players that are performing at a high level and promote a competitive game. It’s not the NFL pro bowl.

Bad idea. That’s not what this game is for. Start up an old timers game if that’s what you want. Make them honorary captains, but don’t put them on the team and certainly don’t play them.

What's next? Participation trophies for all players on AS teams? Ridiculous!

That's cool but maybe make them team captains instead?

Seriously, I'd love a format where we get 4 HoF caliber players at the end of their careers and they play GM, draft their own roster to play a mid season tournament against each others' teams.

I'd watch that on repeat.

Though a number of fans were also happy to see two legends of the game get their flowers.

Who gives a shit this rules. Like Gwynn and Ripken in the 01 ASG. https://t.co/ujiiitn5xd

Honoring Pujols and Cabrera in the All-Star Game is a great idea. It's an exhibition showcase of stars and they are all-time greats.

I figured they'd do something like this for Pujols, but adding Cabrera to this is a very fitting gesture https://t.co/AMyWI7x1IA

Hey @MLB, I love the Pujols & Cabrera invite to the #mlballstar game. Any chance we could have them as the player/coaches of the celebrity softball game? Could be fun…

Pujols and Cabrera are two legends of the game who defined an era, so their inclusion seems to make plenty of sense. While neither is the player they were in their prime, the All-Star Game is above all else an exhibition and a chance for fans to see something special. Who knows, maybe they’ll even have a say in the outcome like legends before them.