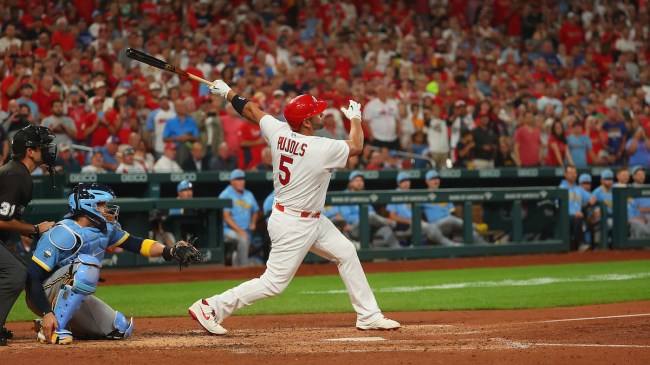 Albert Pujols joined the St. Louis Cardinals this year for his farewell tour and it’s quickly turned into quite the memorable season as he continues etching his name in the history books.

The legendary MLB slugger made history in August by becoming the oldest player with 4 hits including a home run in a game since 1934. Then on Sunday, he finally hit his 697th career homerun to pass Alex Rodgriguez for 4th on the all-time MLB HR list.

Pujols didn’t stop there though and he found himself alongside some elite company once again after Wednesday’s game against the Milwaukee Brewers.

There are THREE players in MLB history with 2,200 RBI.

In the bottom of the 8th with two outs, Pujols found the gap in left-center field for a double. Tyler O’Neill, who was on first, scored easily for Pujols’ 2200th RBI.

With less than 20 games left in his career (not including potential postseason games), it’s unlikely he’ll pass Ruth in RBIs or HRs. But Pujols could still reach that legendary mark of 700 home runs. He’s only 3 away at the moment.

The Cardinals closed out the game 4-1 over the Brewers and further solidified their spot atop the NL Central. If their standing holds, it’ll mean a minimum of two additional games for Pujols once the regular season ends.

Even at 42 years old, Albert Pujols just keeps proving why he is ‘The Machine’. The man just can’t stop making history. It’ll be sad to see him hang up the cleats for good, but he’s doing it in the best way possible this season.

Fans ought to tune in to witness greatness before it’s gone. We’ll all be rooting for HR No. 700!