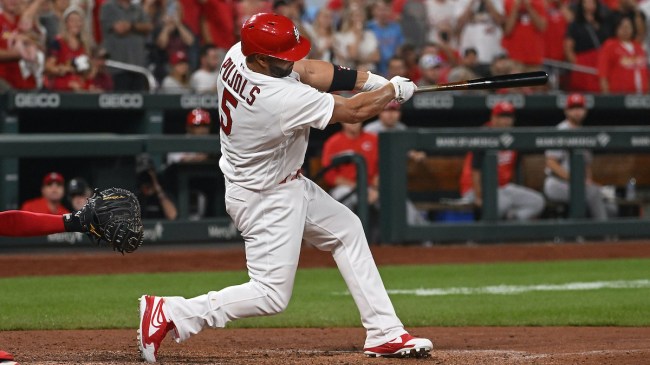 It’s been a week like no other for the St. Louis Cardinals slugger. On Sunday, he passed Alex Rodriguez for 4th on the MLB’s all-time home runs list. Then on Wednesday, he made history by becoming the third MLB player ever to join the 2,200 RBIs club.

His bat stayed hot going into Friday’s matchup against the Cincinnati Reds. In the bottom of the 6th, Pujols blasts a two-run homer to tie the game at four apiece. It also marked home run no. 698 to move him just two shy of 700.

Only three others in MLB history have reached the 700 HR milestone: Barry Bonds (762), Hank Aaron (755), and Babe Ruth (714). With 17 games left in the regular season, Pujols has a very good chance to join elite company once again before hanging it up.

Not to mention, the 427-foot deep shot put him 11 RBIs away from Babe Ruth. It also gave him a 6-game RBI streak, so becoming 2nd on the all-time RBIs list is possible too.

To put into perspective just how crazy Pujols’ performance has been in the last season of his long career, he currently leads National League hitters in home runs since August 10th. That’s 12 home runs in just over the last month, putting him ahead of Mookie Betts (9) and Paul Goldschmidt (9).

Did I really just type that?

AL hitters Aaron Judge and Eugenio Suarez only lead him by a single home run in that span too.

Albert Pujols has 19 total HRs on the season, so his form this last month is unreal. According to ESPN, only Barry Bonds hit more home runs in a single season (28) at the age of 42.

The Cardinals closed out the game 6-5 and Pujols’ HR no. 698 proved clutch in the scoring. In fact, several of these recent home runs have been critical in helping the team solidify their playoff spot, which makes Pujols’ achievements even more impressive.

The Cardinals continue their series with the Reds over the weekend, where Pujols will keep chasing no. 700. Fans can’t wait for the monumental milestone and the reactions are bound to be amazing.

Pujols has already hit two HRs in a game this season (no. 691 & 692), so it’s worth paying attention to every game from here on out.