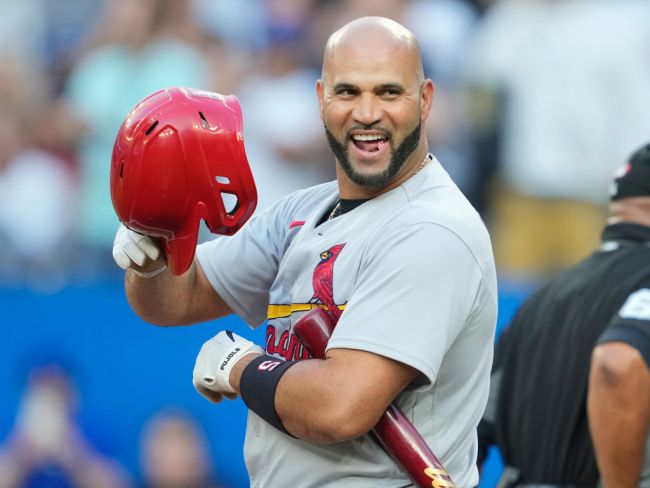 Earlier this year, legendary MLB slugger Albert Pujols returned to the St. Louis Cardinals on a one-year deal with plans to retire at the end of the 2022 season.

Even in his 22nd season, the future MLB Hall of Famer continues to deliver highlights. Recently, Pujols hit a milestone 685th home run to inch closer to fourth place on the all-time career homers list. He was also a participant in the 2022 MLB Home Run Derby, defeating Phillies’ Kyle Schwarber in a surprise first-round upset.

The farewell tour for the two-time World Series champion continued on Tuesday afternoon with his final regular-season visit to the Toronto Blue Jays.

During his 3rd-inning at-bat, Pujol’s gold chain broke and he gave fans yet another moment to remember. Rather than pocketing the chain, Pujols did the unexpected and handed it off to home plate umpire Laz Diaz for a hilarious exchange.

"Hold my chain! I have some hitting to do." – Albert Pujols pic.twitter.com/FjNAHoJXsO

The announcers go on to joke that Pujols would never see a strike called again with Diaz behind the plate. But as it turns out, Pujols didn’t need the help while down 0-2 in the count. On the very next pitch, he recorded an RBI single to tie the game up 3-3.

Now that’s a legendary move from a legendary player. Some fans even wondered if Pujols chose not to pocket the broken chain because he knew he’d be racing down the base path. The man is one of the greatest sluggers in MLB history after all.

Jokes aside, the entire afternoon was filled with memorable moments for Albert Pujols. Blue Jays fans gave the slugger a standing ovation when he stepped up to the plate for his first at-bat. With only so many games left in his career, fans will have to cherish these moments while they still can.