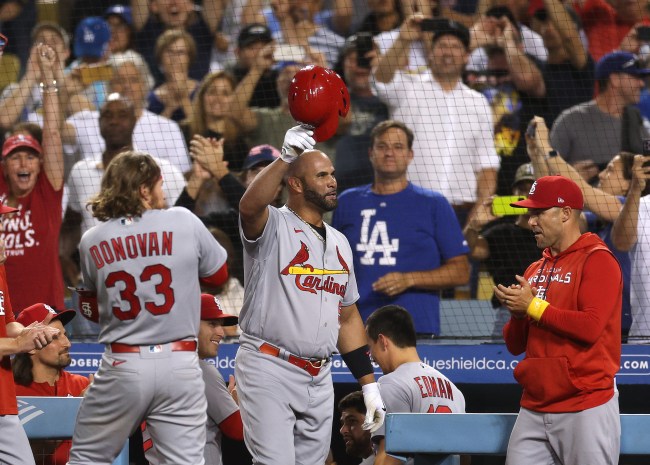 Many thought the career of Albert Pujols was over after last season when he split time between the Angels and Dodgers amid struggles. But, He decided to come back for one more year with the team he played his best years with, the St.Louis Cardinals, and it’s paid off.

He needed 19 home runs coming into the year to reach 700 home runs. Only Barry Bonds, Hank Aaron and Babe Ruth have hit 700. Most thought he couldn’t get it, but, he had hot middle of the season, and coming into Friday night’s tilt with the Dodgers only needed two home runs to reach the magic number.

Pujols hit two bombs against the Dodgers to give him 700

Turns out, September 23rd would be the day.

In the 3rd inning with one out, Pujols got a fastball in the heart of the plate and he did not miss it, clobbering it for number 699.

Most thought that this got him one closer and he would have the remaining games to get the final round-tripper. But, the slugger had other ideas, and in his next at-bat did this to a hanging slider.

It’s quite the achievement for the surefire Hall of Famer, who will get to play playoff baseball one final time with the St. Louis Cardinals this year.

With such a monumental achievement, the baseball world was full of praise for the Cooperstown lock

He becomes the first person ever from outside the United States to hit 700 home runs.

Albert Pujols becomes the first man ever born outside of the United States to hit 700 major league home runs.

Giants players watching Pujols' HR No. 700 on the scoreboard in Arizona ❤️🥺 @NBCSGiantspic.twitter.com/wfomK5Fv1D

Bob Nightengale actually makes a great point. Pujols was really pretty close to breaking the all-time record of 762 set by Barry Bonds. Just a couple of breaks and he probably gets it.

If not for the Covid shortened season, Albert Pujols would have passed Babe Ruth.
If not for his injuries in Anaheim, he’d be the home run king.

Pujols has been a positive force for the Cardinals this year, so why shouldn’t he come back and play another year and try to pass Babe Ruth’s 714?

Albert Pujols come back and pass The Babe challenge

Congratulations to Albert Pujols, the best hitter of a generation.