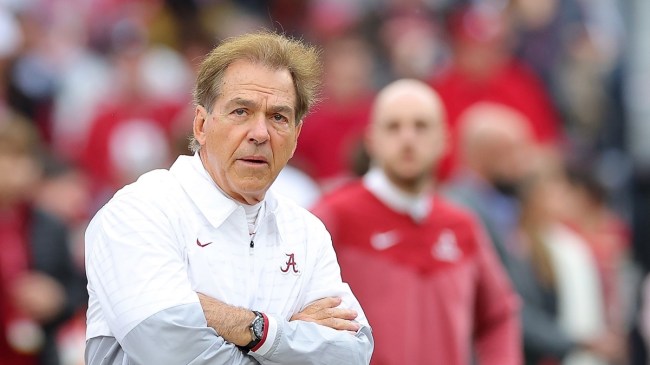 The Alabama Crimson Tide were the favorites to win the national championship coming into the season. Last year’s national runner-up brought back arguably the best offensive player, Bryce Young, and best defensive player, Will Anderson, in the country. Couple that with the greatest coach of all time, Nick Saban, and it seemed like a winning formula.

But, things didn’t go quite to plan. The Tide lost two games, one to Tennessee and another to LSU. They lost both on the final play of the game, and many still think they are one of the top teams in the country.

Still, their path to getting into the College Football Playoff was slim entering conference championship week. They needed USC and Kansas State to both lose. But, both did lose. Now, there’s a debate over whether the Tide or TCU deserve in.

At halftime of the Big Ten Championship Game between Michigan and Purdue, Saban joined the Fox broadcast and made his plea.

People were not happy with the coach.

Nick Saban just cited Vegas point spreads during halftime of the Big Ten title game as evidence for why Alabama should make the playoff.

Get Saban off Fox right now 😂😂this is crazy

That was just gross to watch.

But, Las Vegas still thinks TCU will get in, as Alabama is +800 to make the playoffs.