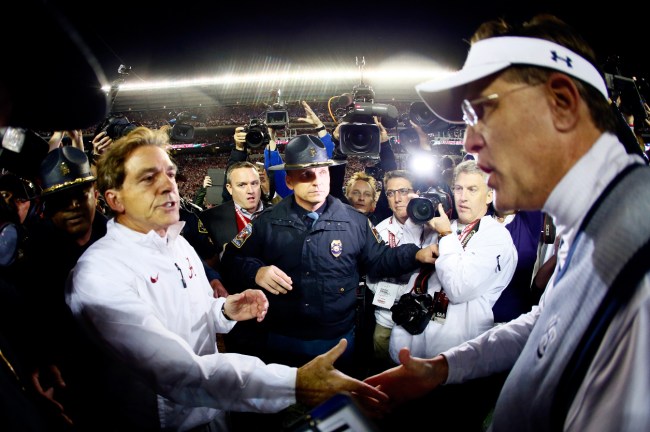 Alabama Crimson Tide head coach Nick Saban is one of the best ever in the sport. He has built one of the best dynasties, and Alabama’s incredible run doesn’t look to be going away anytime soon.

However, it turns out that Saban was close to leaving Alabama and heading for ESPN after the infamous ‘Kick Six’ against Auburn — I think we all remember that incredible play.

Seven years ago, the legend of the "Kick Six" was born. pic.twitter.com/7w96kF6KDz

This play will remain in college football history forever as one of the most improbable things we have ever seen. But this will sting Saban and Alabama fans for a long time.

It hurt Saban so much that he almost dashed for ESPN, according to John Talty of AL.com. Salty wrote about it in his new book, The Leadership Secrets Of Nick Saban.

After the season, Satan reportedly “empowered Khan to reach out to ESPN with the message Saban was thinking about the next chapter in his career and considering whether media should be a part of that.”

Nick Khan is a sports media agent, and Saban’s interest in heading to ESPN was considerable. However, as we all know, Saban decided to stay in Tuscaloosa, and it’s a good thing he did because the Crimson Tide has continued to be among the best in college football every year.

But, he almost left, and we can only wonder how different things would have been for Alabama, Nick Saban, and all of college football.