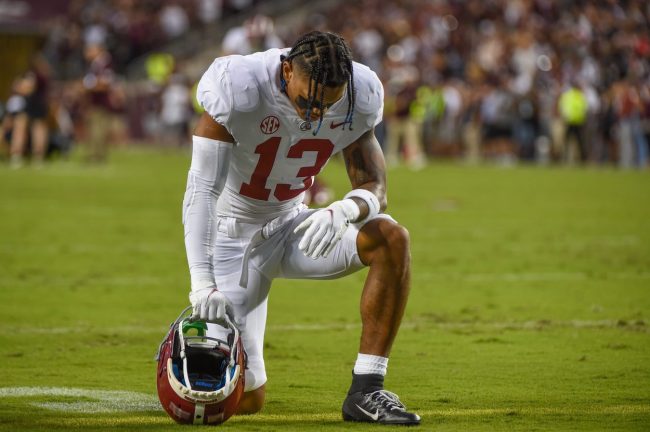 That comes after what Saban referred to as “rebuilding year” in 2021 where the Tide still won 13 games and fell just short of yet another national championship. Now the legendary head coach has his sights set on the new season and his players locked in.

Bama players are so locked in, in fact, that three of the team’s players just signed an NIL deal that requires them to stay off of social media.

As part of the deal, the three players have agreed to not use social media until Alabama’s opening game on September 3rd. https://t.co/HIGGLguK6j

Projected starters Malachi Moore, Javion Cohen and Jermaine Burton inked a deal with Six Star Pro. As part of the deal, the nutrition company is challenging the players to cut ties with all social media prior to Alabama’s season-opening game against Utah State on Sept. 3.

Just don’t tell Malachi Moore (Defensive Back), Javion Cohen (Offensive Tackle) and Jermaine Burton (Wide Receiver), all of whom have partnered with Six Star Pro Nutrition® on the most interesting and ambitious name, image and likeness (“NIL”) deal to date. Turning off the #BamaRush hype, they are focusing on the September 3rd opener and a run at a record 19th National Championship, recruiting teammates in the process.

“It all starts with eliminating distractions, putting down the phones and focusing on the task at hand. Nothing against #BamaRush, but we’re focused right now,” Moore, a junior who started in all 15 games last season including the National Championship, said on his Instagram page. “It’s why I’ve teamed up with Six Star Pro Nutrition to go on a mini social media detox through the rest of preseason so we can represent y’all well this fall. We know what the goal is.”

The program is centered around #BamaRush. The viral hashtag has flooded social media documenting greek life and rush week on the school’s campus.

NIL Continues To Play An Increasing Role In College Athletics

Ironically, the brand signed its first NIL deal with twins Hanna and Haley Cavinder in 2021. The duo are social media stars who played basketball for Fresno State. Haley has since transferred to the University of Miami.

Saban has been vocal about NIL and its effects on college football in the past. His comments even started a war of words with Texas A&M coach Jimbo Fisher. Now, it appears he’s using the new rules to his advantage. And he’s doing so in more ways than one. There’s a reason many consider Saban the GOAT.