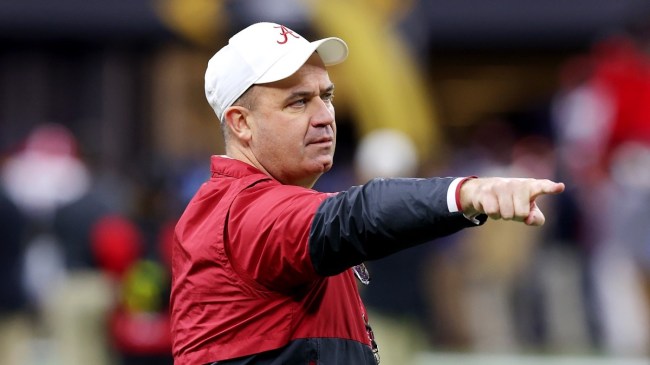 Despite Alabama surviving a strong test against a Texas team that was the better team for most of the game, fans are not happy. Most of that ire is going towards offensive coordinator Bill O’Brien.

Texas is outplaying Alabama because Gary Patterson is out coaching Bill O’Brien. Crimson Tide have more talent and an elite QB, but O’Brien is holding them back.

It was tough sledding for an Alabama offense that only produced 20 points and averaged just 5.9 yards a play. Take out a long touchdown run by Jace McClellan and it was a putrid day. It was especially bad for the running game. outside of McClellan’s 80-yard run, the Crimson Tide ran the ball 23 times for 80 yards, a good chunk of that came on Bryce Young scrambles.

The passing game wasn’t much better. Heisman winner Bryce Young only had 213 yards on 39 attempts. His receivers struggled to get open all day and the pass protection wasn’t there either.

Fans placed most of the blame on the feet of O’Brien.
This tweet by @James425 may have gone a little overboard, but I’m sure he would settle for a firing.

I’m publicly out on Bill O’Brien.

Houston Texans fans, where Bill O’Brien served as the head coach, seemed all too familiar with puzzling playcalls from the Tide offensive coordinator.

Ahh I remember these screen passes from Bill O’Brien’s time at the Texans. He will be the downfall of Alabama

@SSN_Alabama simply thinks Saban should fire him on the airport tarmac just like how USC fired Lane Kiffin.

Ahh I remember these screen passes from Bill O’Brien’s time at the Texans. He will be the downfall of Alabama

A win is a win, but that Alabama offense was supposed to be dominant. What we saw today wasn’t a national championship offense, and that’s the standard in T-Town.