The Alabama Dynasty May Finally Be Coming To An End 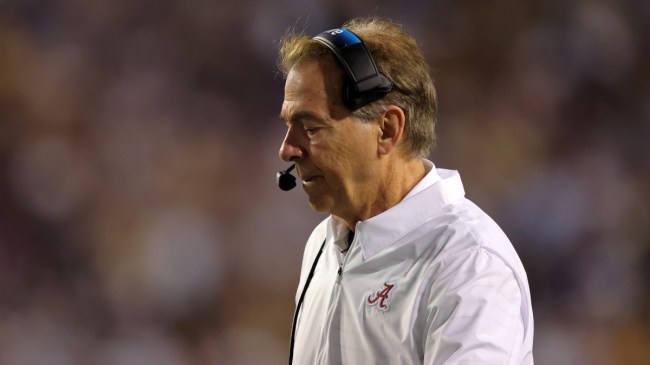 The Nick Saban era at Alabama has been the most dominant dynasty in all of modern college football. The Crimson Tide have won six national titles, eight SEC titles and eleven SEC West titles in Saban’s fifteen seasons heading into the 2021 season. That’s an unprecedented run in the game’s modern history, and the Crimson Tide has been synonymous with winning and excellence.

This year was supposed to continue that trend.Alabama came into the year ranked number one in America. And, they returned Heisman trophy winner Bryce Young, and arguably the nation’s top defensive player, Will Anderson.

But, things haven’t gone to plan. The Tide lost to Tennessee back in October in a crazy game. That didn’t hurt them too much. But, they lost to LSU 32-31 in overtime Saturday night, effectively ending their SEC title hopes and playoff chances.

LSU WINS!!!!!! CLEMSON AND ALABAMA SEASON OVER IN THE SAME NIGHT!!!!!!!! pic.twitter.com/XnwNk9bDHr

Now, people are wondering if the dynasty is finally coming to an end.

People are speculating if the Alabama dynasty is finally over

Some of this may be genuine analysis, and some may be wishcasting. But, a lot of people are talking as if this is the end of the Tide’s dynasty.

Is the Bama dynasty over?

Even some Crimson Tide fans are beginning to think this is the beginning of the end.

Tha Alabama dynasty IS no doubt DEAD this time you won't see Bama in Championships again until you can get Coordinators who can make adjustments, get their guys going. Bryce couldn't lift this cast of misfits because the Coordinators robbed EVERYONE of success a FAILURE!

Thanks to this guy, The Bama dynasty is going down the drain. pic.twitter.com/Qn07YYoJ80

Gotta say, it’s hard. to have much sympathy for them! Alabama has a big test next week against Ole Miss.