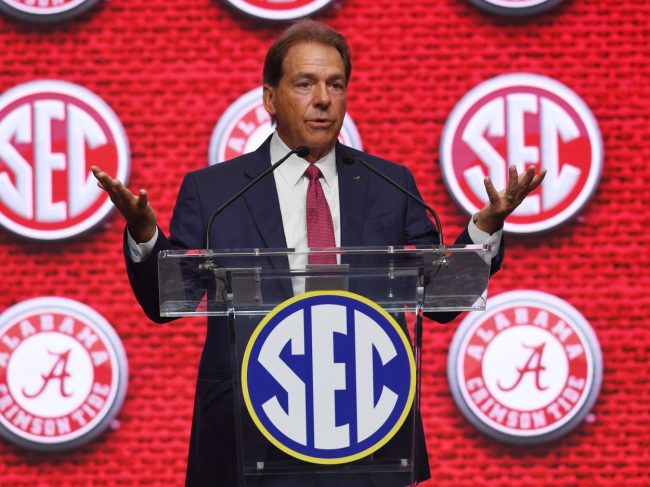 The Alabama Crimson Tide football team was pretty darn good in 2021. Alabama posted a 13-2 record. It won the SEC championship yet again, and came a few extremely untimely injuries away from winning another national championship.

In addition to that, quarterback Bryce Young won the Heisman Trophy. While edge rusher Will Anderson won the Bronko Nagurski Award as the nation’s top defensive player. Not a bad season by any means.

But if Nick Saban’s latest comments are to be believed, the entirety of the college football world should be terrified of the Crimson Tide in 2022.

Saban Says Alabama Was “Rebuilding” In 2021

Saban made an appearance  on the McElroy and Cubelic in the Morning radio show in Birmingham on Wednesday. While on, he said that the 2021 season was “kind of a rebuilding year.”

The legendary head coach has become a fixture on his former quarterback’s radio show, but may just be his craziest comment yet. Alabama lost six players to the 2022 NFL Draft who left early. But Saban doesn’t believe that will slow his team down moving forward.

“But it also creates opportunity for other players to be able to shine in the program and be able to contribute in a positive way,” he said. “So nobody knows for sure how this stuff is going to come to fruition, but that’s part of the excitement and challenge we have to be able to develop a team.”

The Crimson Tide are the overwhelming favorite to once again win the SEC and is listed as the +175 favorite to win the National Championship according to DraftKings.

If 2021 was a rebuilding year, this year’s version of Alabama could be terrifying.