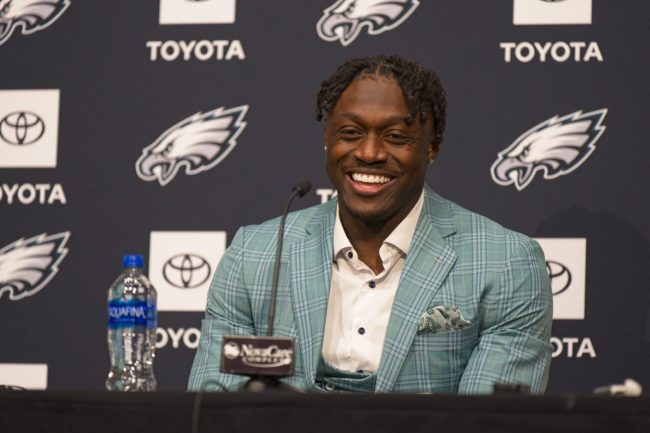 Philadelphia Eagles quarterback Jalen Hurts has had quite the offseason. Hurts, who has become the team’s unquestioned starter in the last year, started the offseason by teaming with Pro Bowl wide receiver AJ Brown after the Eagles acquired him from the Tennessee Titans.

Hurts then showed off his skills in the kitchen, becoming a true “Philly Guy” when he learned how to make his own homemade cheesesteak.

But the latest reports about the young Oklahoma product aren’t overly encouraging if you’re a Philadelphia fan.

Derrick Gunn, who spent more than two decades working for NBC Sports Philadelphia (RIP Comcast Sports Net) had this to say about Hurts:

“One person said ‘let me give you a scenario of what he went through in one day of practice.’ It was a 10-play scenario. He three picks, four incompletions and three sacks”

Not an overly encouraging report for the guy that is supposed to lead the Eagles to the promised land. Brown, however, quickly rushed to the defense of his new signal caller.

In a 10 play series
Jalen threw 3tds to Me.
Donovan Mcnabb and T.O. fought the other 4 plays . Vince papale came out of retirement and had the other 3 receptions. #FlyEaglesFly

Philadelphia media is notoriously tough on its athletes, but Gunn is considered one of the most reliable sources when it comes to the Eagles. That’s probably not the best sign for Hurts. What is a good sign, however, is that Hurts’ star wide receiver appears to be firmly in his corner.

Brown and second-year wide receiver Devonta Smith are pivotal Hurts’ chances of success. If Gunn’s report is true, then that relationship becomes even more important. For now, at least, it appears they’re all on the same page.