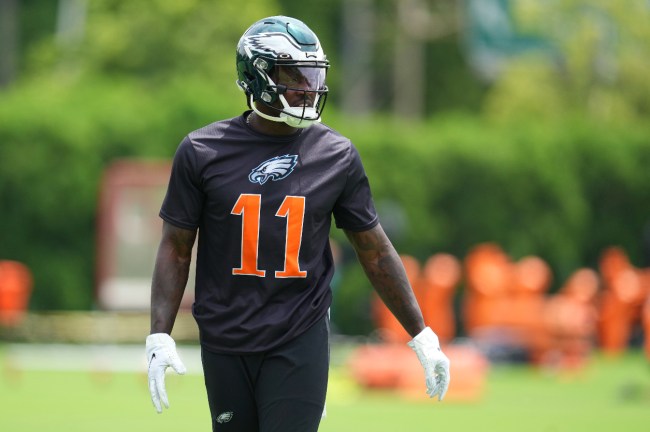 Former Tennessee Titans wide receiver A.J. Brown is not mending any relationships with his former team and their fans. After being traded to the Philadelphia Eagles, Brown has already undergone a few different issues that have raised some eyebrows from his former team.

Well, Brown has done it again and got into it with a salty Titans fan in the process.

For the love of God, just stay off of social media. You’re already a villain. No need to make it a “stupid villain.” #Titans https://t.co/LBcM7e6Y1m

The fan responded to Brown’s tweet on weather, and after Brown saw the response, he hit him with an all-time jab.

For the love of God , I was the best receiver to play for your franchise. Shut up and move on. You mad at the wrong person 🕺

Brown just wants people to move on, and this comes after he recently canceled a kids camp due to inappropriate behavior from the fallout of being traded.

Brown is right — just move on.

However, the claim Brown made is a bit of a head-scratcher. He said he was “the best receiver to play for your franchise.”

Was Brown the best wide receiver to suit up for the Titans? Let’s examine the numbers.

In three seasons in Tennessee, Brown had a pair of 1,000-yard seasons and then 869 yards in just 13 games in 2021. He totaled 24 touchdowns during his time with the Titans and was set to become a superstar with the departure of Julio Jones.

But, let’s not forget the other wide receivers who suited up for the Titans. Frank Wycheck and Derrick Mason are two of the recent names that come to mind. Wycheck was just short of 5,000 yards during his time with Tennessee and has 482 catches — third-best in franchise history.

Mason finished with over 6,000 yards and is top-10 in many Titans categories. Then we can go further back, with Ernest Givins posting 7,935 yards, good for 500 yards ahead of second place on the team’s all-time leader board.

AJ Brown’s best season with the Titans wasn’t even as good as Derrick Mason’s 3rd best. I love AJ, but he’s full of it.

Plus, Randy Moss played for the Titans for a bit, so there’s that.

Nonetheless, Brown continues to take out his frustration on the Titans fanbase, and this might not end anytime soon.

One more interesting note: The Eagles host the Titans on December 4, and Brown will get to face his former team. Get your popcorn ready.