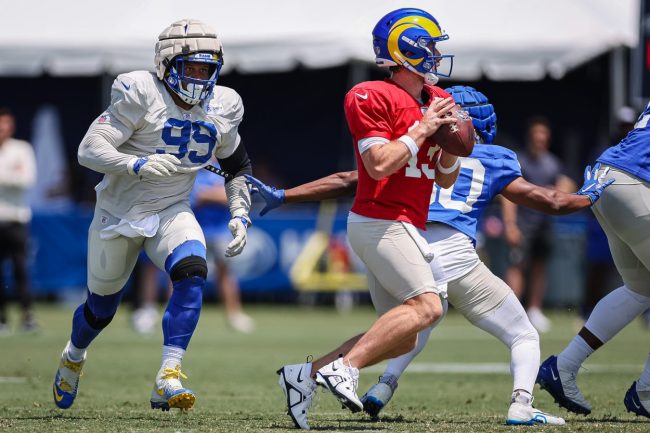 Perhaps holding a joint practice between the two teams who last met in the Super Bowl wasn’t the best idea ever?

At least, that’s one lesson you could take away after an absolutely gigantic brawl broke out between the Los Angeles Rams and Cincinnati Bengals on Thursday.

Rams and Bengals went AT it during a joint practice 🔥

The two teams are practicing alongside one another ahead of their preseason week three games on Saturday. There doesn’t appear to be a consensus opinion on how the melee begun. But it apparently was not the first of the practice.

Practice is called early as a third scuffle turns into a full on fight between #Bengals and #Rams. @Enquirer pic.twitter.com/X6wk18TSaH

Huge fight now. Rams D-Bengals O going at it again. Appeared Aaron Donald had a Bengals helmet in his hand and was swinging it repeatedly.

It had a second wave with more action.

Some are suggesting the fight began after a squabble between newly acquired Bengals tackle La’El Collins and Rams defensive lineman Leonard Floyd.

A full out brawl has taken place at #Bengals and #Rams practice. It has been all La’el Collins and Leonard Floyd all day, they just went after each other again and caused a full out fight with severe players falling to the ground

But perhaps the most notable takeaway from it all was Aaron Donald’s involvement. The three-time NFL Defensive Player of the Year can be seen wielding a pair of Cincinnati Bengals helmets and swing them wildly before being thrown to the ground.

Donald has already shown off his penchant for physicality this offseason with a bizarre choke move on his teammates. But this is next-level terrifying. The ridiculously jacked defensive tackle is already scary enough without weapons in his hands, but this takes it to the next level.

Some weren’t a fan of the move by Donald, comparing to Cleveland Browns defensive end Myles Garrett. Garrett missed the second half of the 2019 NFL season after swinging a helmet at the head of Pittsburgh Steelers quarterback Mason Rudolph.

A reminder: Myles Garrett was indefinitely suspended by the NFL following his helmet-swinging incident. Garrett missed the final six games of the 2019 season before the NFL reinstated him in February 2020.

Myles Garrett is waiting for the suspensions. https://t.co/I3T7GAVlvf

seems to happen with him a ton

the NFL should be suspending Aaron Donald for some amount of time IMO because this is absolutely recklesshttps://t.co/fDOc4YEKEE

Should Donald face a suspension or fine, finances won’t be an issue. He signed one of the richest deals in league history with the Rams in early June.

Donald and the Rams are set to start their Super Bowl defense on Sept. 8 against the visiting Buffalo Bills.