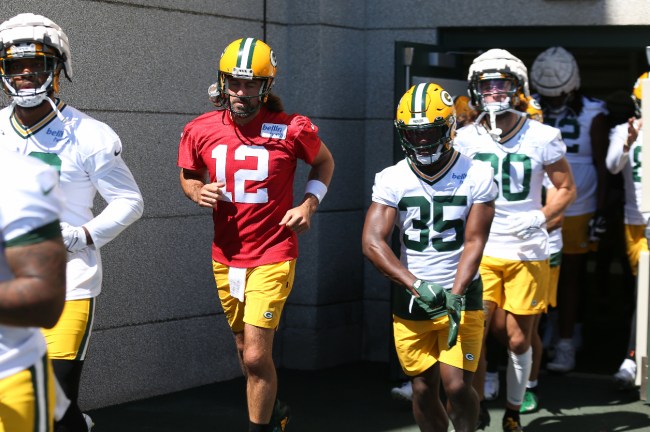 The Green Bay Packers receiving corps will look much different in 2022. The departure of Davante Adams has a massive hole waiting to be filled.

Could it be Allen Lazard? Can Randall Cobb resurrect his career?

Or, could second-round draft choice Christian Watson emerge as the go-to target for Aaron Rodgers? Those questions remain unanswered, but Rodgers did sing heavy praises for another wide receiver.

“Every single day … there’s been at least one kind of ‘wow’ play for him, and that’s kind of rare for a young guy like that. Now we’ve had some guys over the years kind of do that, but they’re all in the top 10, I think, in the Packers’ receiving history.”

That is heavy praise for the rookie, and Rodgers knows best. Romeo Doubs went under the radar for some reason, but the Packers wasted no time choosing him in the fourth round.

So far, he looks every bit like a starting wide receiver.

Aaron Rodgers beginning his 18th training camp, this time throwing to another No. 87 in rookie WR Romeo Doubs. And we’re off. pic.twitter.com/UipQSmhp33

Doubs was the top target for Carson Strong at Nevada, and now he can become the primary target for Aaron Rodgers if he continues on this trajectory.

Sure, Adams is gone, but the new wave of Packers’ pass-catchers has a chance to step up, and so far, Rodgers is thrilled with the development of Doubs.