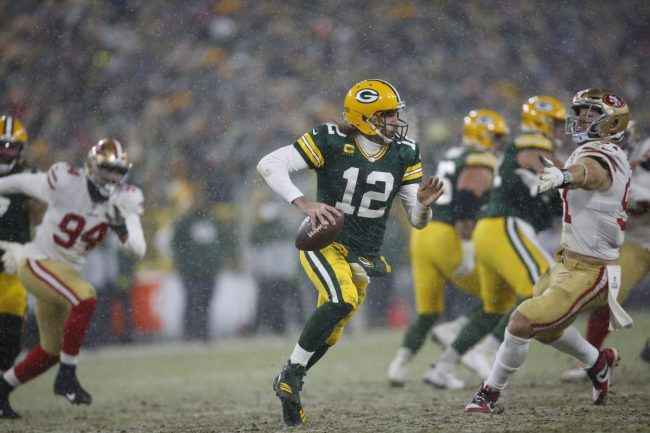 Has anybody ever seen Aaron Rodgers and Nic Cage in the same place?

The Green Bay Packers star quarterback has had a relatively quiet offseason by his standards. Sure, he lost star wide receiver Davante Adams to the Las Vegas Raiders. Oh, and he has a new girlfriend named Blu who may or may not be a witch. Oh, and he also has a new tattoo, his first, that matches one that said witch (or not witch) has as well.

But other than that, it’s been a totally normal, definitely not weird offseason for Rodgers.

He must have felt a little unhappy out of the spotlight though, because he showed up to Packers training camp in an absolutely hilarious manner.

Yes, that is two-time defending NFL Most Valuable Player Aaron Rodgers. Or, at least we think it is. Rodgers’ look bares a striking resemblance that of superstar actor Nic Cage in the 1997 movie Con-Air. And that wasn’t lost on Packers fans.

Rodgers really getting into his Con Air cosplay https://t.co/amVgUf616B pic.twitter.com/3nbYRgib3s

Though not every Green Bay fan immediately thought of the famous actor. Some felt Rodgers evoked the look of another huge 90s star.

it is with great regret that i must report that this is huge scott stapp energy https://t.co/hIEwm0wQso

And also some, uh, less famous stars from the 90s.

Rodgers enters the 2022 season looking to win the NFL MVP award for the third consecutive season. Only former Packers great Brett Favre has achieved that feat. Favre one the award each season from 1995-1997.

Another MVP award would also be the fourth of his career, placing him just one behind Peyton Manning for the record.