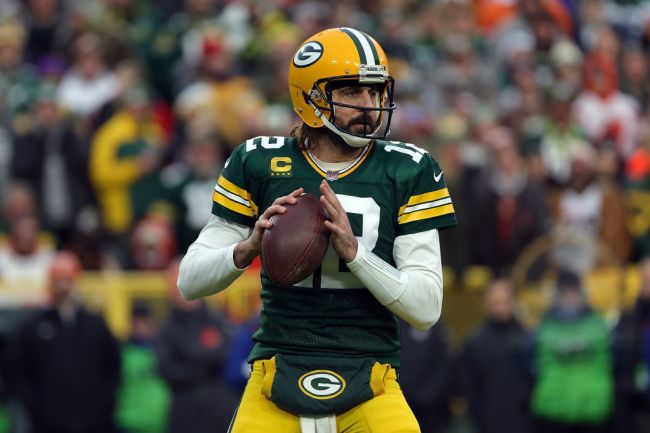 Aaron Rodgers might just be one of the most die-hard Nicolas Cage fans out there.

The Green Bay Packers quarterback has given his fair share of stellar movie star impressions in the last year. Rodgers went all out to reprise Keanu Reeves’ role as John Wick on Halloween. More recently, he showed up to training camp dressed as Nic Cage’s Cameron Poe from the 1997 movie Con-Air.

However, it appears the four-time MVP has taken his latest fandom to another level. While interviewing Rodgers on Tuesday, reporters noticed a rather peculiar item sitting atop his locker shelf.

The item in question turned out to be a full-on bust of Nic Cage’s head and Rodgers was more than happy to give everyone a closer look.

Aaron Rodgers has a Nic Cage head in his locker pic.twitter.com/D1TOtEbWWg

Sure, it’s by no means a traditional locker room decoration, but Rodgers was all smiles when discussing the new addition. The enthusiasm he displays makes you wonder if he actually values it more than his Lombardi Trophy. Or perhaps, it’s the good luck charm he needs for a second Super Bowl ring.

While some weren’t convinced by the bust’s resemblance to the Hollywood actor, Rodgers insisted it was indeed Nic Cage. At the very least, it resembles Cage’s recent role in The Unbearable Weight of Massive Talent. “It’s like the Hall of Fame bust, they don’t really look like the Hall-of-Famer,” one reporter says.

Aaron Rodgers doesn’t know who sent it but there’s now a bust of Nic Cage in his locker. pic.twitter.com/ko81lVPY6Y

As it turns out, Rodgers hadn’t custom ordered the bust himself. Although it’s not something we’d put past him given his obsession with the A-list star. Apparently, an unknown person had sent the bust in with no message.

When you have #PackersCamp at 11, but need to steal the Declaration of Independence at 4.@AaronRodgers12 | #GoPackGo pic.twitter.com/RjUQ26FzeA

After everything that Aaron Rodgers has shared this past off-season, including his psychedelic experience with ayahuasca, a bust of Nicolas Cages’ head probably isn’t the wildest story we’ve heard. Although, it’s definitely one of the more odd ones.

As the NFL season ramps up, fans will likely be seeing more of Rodgers’ new locker room buddy. Maybe, it’ll even serve as inspiration for his next Halloween costume.