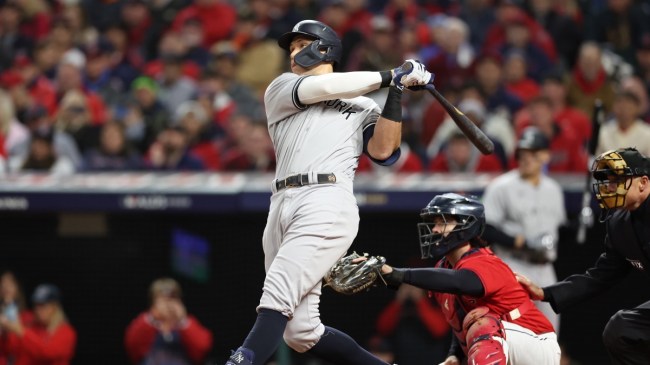 Aaron Judge had a historic season for the Yankees this year. His 62 home runs set a new American League record and the soon-to-be free agent is a near lock to win the AL MVP.

But, he did not get off to a good start in the playoffs, and the Yankees found themselves tied with the Cleveland Guardians 1-1, heading back to Cleveland in the best-of-five. In Game 3, Judge broke out of his slump in a big way.

After starting the postseason 0-9 with 8 strikeouts, Judge came up to bat in the top of the third with a runner on and the Bronx Bombers trailing 2-0. He delivered in a big way.

AARON JUDGE NUKE AND THIS GAME IS TIED pic.twitter.com/ThmAA9OSTG

That’s more like it from the AL home run champion.

Aaron Judge just broke out of the coldest slump of his season with a 449-foot home run.

These Yankees fans were loving it.

What a big hit in a must-win game for the Yankees if they don’t want to have to face an elimination game on the road in Cleveland Sunday night. Hopefully, for New York fans, that gets him all the way out of his slump.