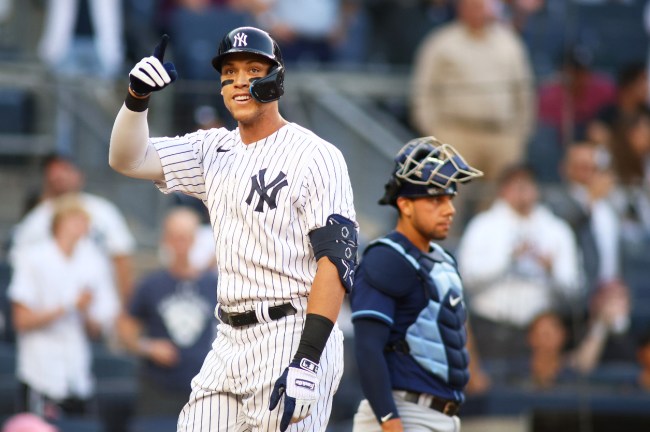 The New York Yankees are going to have a tough time meeting Aaron Judge’s contract demands if he continues to rake like this.

On Wednesday, Judge hit another home run, giving him 25 on the season and a commanding lead over the second-place guys — Austin Riley, Byron Buxton, and Pete Alonso all have 18.

Judge is also Top 10 in the MLB in batting average with a .313 clip so far and fourth in RBIs with 49. Plain and simple, Judge is showing why he deserves to be one of the highest-paid players in the MLB.

The Yankees have a ton of legends, and now Judge’s name is etched into record books next to two all-time greats: Mickey Mantle and Babe Ruth.

On Wednesday, Aaron Judge joined 1928 Babe Ruth and 1956 Mickey Mantle as the only Yankees with 25 HR within the player's first 60 games of the season (Ruth and Mantle each had 27 HR through 60 games played in those seasons). pic.twitter.com/3M6U6KZpx0

Judge deserves to be paid, and at this pace, he is going to be putting his name in more Yankees record books.

The chase for the big 6-0 is officially ON. 👀 pic.twitter.com/vWehSuH7eM

The Yankees probably should have given him the bag already. Can you imagine what happens if Judge gets to 60 home runs?

Right now, he’s more than on pace for that number.