All Rise! Aaron Judge Has Tied One Of The Great Records In All Of Sports As The Sports World Reacts 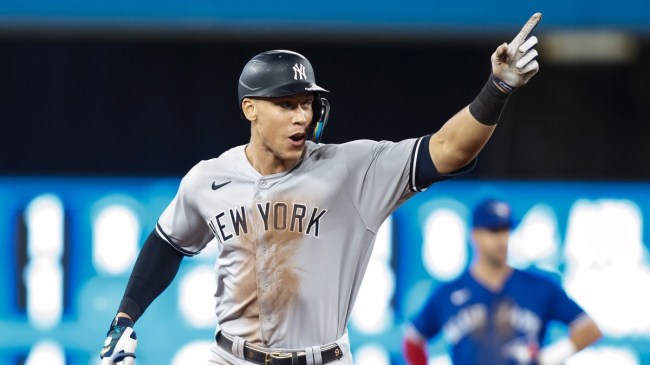 Undoubtedly, the New York Yankees are the most prestigious team in Major League Baseball history. With 27 World Series wins and all-timers like Babe Ruth, Mickey Mantle, and Mariano Rivera. But, their most storied record is Roger Maris’s 61 home runs, which still stands alone as the American League record. That is, until now. Yankee Aaron Judge has been phenomenal all year and has now tied Roger Maris’s 1961 record.

Judge did it with a rocket against the Blue Jays

Condolences to the guy who dropped a 7-figure baseball.

The Yankees have 7 games left for Judge to hit a magical 62nd home run, the most in the century-plus history of the American League

The Sports World reacts to the legendary achievement

Billy Crystal is one of the most famous New York Yankee fans and he had to share his well-wishes for the slugger.

61! With my great respect to the Judge and Maris family. pic.twitter.com/NrpjsoTpXI

Speaking of that poor fan…

Members of Maris’s family as well as members of Judge’s family was in attendance and looked pleased that the outfielder broke the record.

Of course, some people are saying that it doesn’t really mean anything because so many National League players have hit more
than 61 home runs.

Congratulations to Aaron Judge on tying Roger Maris for the seventh most HR hit in a season.

Here are the statcast stats for his home run.