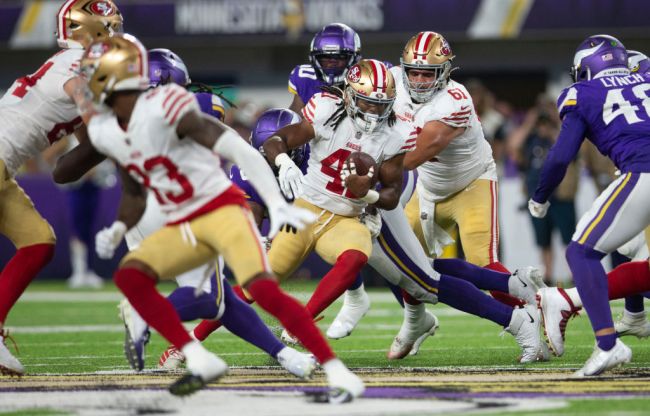 The NFL enforcing ridiculous rules is hardly something new, but the San Francisco 49ers are truly pushing the boundaries this preseason.

Earlier in the month, coach Kyle Shanahan publicly stated his beef with the league over its new hat rules. The NFL is no longer allowing the him to wear hats from previous years and the 49ers’ head coach wasn’t a fan of the puzzling decision.

Just weeks later, the NFL has cracked down on the 49ers once again. Instead of hats this time, it involved safety George Odum’s pants and socks.

So I got fined 5k.. yeah The NFL something else’s. Talking about my knees NOT covered. Where? pic.twitter.com/Nn9CQpc3N8

Following the 49ers preseason game against the Minnesota Vikings, Odum was informed that the NFL fined him $5,305 for failing to cover up his knees.

Specifically, your pants failed to cover the knee area. Rule 5, Section 4, Article 3, Item (4) of the 2022 Official Playing Rules of the National Football League states that pants must be worn over the entire knee area; pants shortened or rolled up to meet the stockings above the knee are prohibited.

Obviously, Odum wasn’t amused by such a steep fine for something seemingly so absurd. On top of that, he believes it’s a fine for a violation he didn’t actually commit.

The 49ers’ safety fired back by posting a photo of himself from the game where the alleged infraction occurred. Interestingly, the photo showed Odum’s knees covered but not his teammate behind.

It seems the NFL may have misidentified who the fine was for. If that’s actually the case, Odum can appeal the fine within three days to sort it out.

Tyreek Hill vs. Jalen Ramsey 🥊 Who are you taking?https://t.co/EBIVDxt7pw

This latest incident marks the second time this preseason that the 49ers have taken issue with the NFL’s bizarre rules. With the regular season quickly approaching, the team will hopefully avoid violating any uniform-related rules in the future.