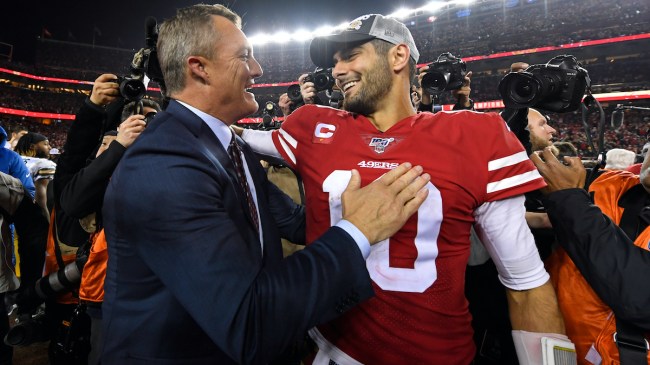 Now that the Jimmy Garoppolo trade/cut saga is over, more details are finally being revealed about what went down during the former starting quarterback’s tumultuous off-season.

Garoppolo led the San Francisco 49ers to the NFC Championship before falling short to eventual Super Bowl winners, the Los Angeles Rams. He finished the season with an unimpressive 1.467 touchdown to interception ratio (22-15) and Trey Lance soon replaced him as the team’s starter.

The 49ers expected to find a new team for Jimmy G via trade, but nothing materialized as the NFL’s roster cutdown deadline grew closer. Most people figured the team would just cut him. Instead, they surprised everyone by making him the highest-paid backup QB.

With the entire saga coming to an end, 49ers general manager John Lynch shared insights into the trade talks surrounding their former starting quarterback. It appears Jimmy G’s shoulder surgery was likely the nail in the coffin for why no trade partners followed through.

Lynch on Garoppolo trade talks:
"Combine time, there were really serious talks. Probably 2-3 teams that I felt this was going to happen. That’s when news broke (of shoulder surgery). Then things went way they went. I’m glad we’ve arrived where we’re at … We're happy he's here"

Garoppolo suffered a shoulder injury during the 49ers’ wild-card game against the Dallas Cowboys. He even played through the injury in the next two playoff games. Then he underwent surgery during the off-season to repair a torn capsule in his throwing shoulder.

While Garoppolo expected to recover by the season’s start, the decision still severely impacted his trade value. On top of that, he was set to earn nearly $25 million in base salary. Clearly, an injury-prone QB with a massive contract isn’t the ideal trade prospect.

According to Lynch, 2-3 teams were seriously interested in Garoppolo when he was first made available. However, talks went silent following the announcement of his surgery.

Unable to find a willing trade partner, the 49ers began tossing around the idea of keeping him instead. Discussions began in late July and they ultimately decided to follow through.

GM John Lynch said he and Kyle Shanahan started floating the idea of bringing Garoppolo back about a month ago. His agents wanted to exhaust all options of a trade, which was the case when no other QBs were hurt in the preseason. Which is why the deal was finalized yesterday.

It appears the hold-up was due to Garoppolo’s agents waiting for any preseason injuries to open up a starting spot. However, as seen by his decision to stay, no opportunities arose.

In the end, it appears to have worked out for both parties. Garoppolo will now serve as backup to Trey Lance, but he’s got some massive incentives should he end up starting.

Is it a blow to Jimmy Garoppolo's ego that he is now the backup QB?

"If that's gonna take a blow to your ego, you gotta check your ego a little bit." pic.twitter.com/oSlCgQom9I

Garoppolo is no longer a starter, but that isn’t fazing him. He’s happy to remain with the 49ers for the time being and the 49ers are sure happy to have him.

Jimmy Garoppolo hits free agency in 2023, but there’s a possibility the 49ers trade him before then. For now, the team will hope he focuses on helping starter Trey Lance ahead of their season opener against the Chicago Bears.