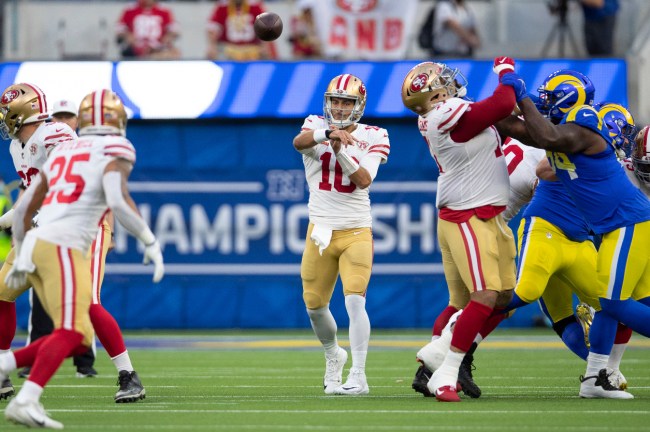 The San Francisco 49ers quarterback situation has been a significant talking point ever since they selected Trey Lance in the 2021 NFL Draft.

Head coach Kyle Shanahan stuck with veteran Jimmy Garoppolo, and the 49ers finished just short of the Super Bowl. But, all signs pointed to Lance becoming the team’s starter in the future.

Then, Garoppolo was a trade target for several teams before they filled their vacancies. The Carolina Panthers acquiring Baker Mayfield shut the door on the countless Jimmy G rumors.

According to Adam Schefter of ESPN, the 49ers have given Garoppolo and his agent permission to seek a trade.

49ers officially have given Jimmy Garoppolo’s agents Don Yee and Carter Chow permission to seek a trade, sources said. Garoppolo has been cleared to start practicing, per team source; 49ers still are expected to exercise caution with him this summer.

Garoppolo had surgery in the offseason, which significantly hurt his trade value. At this point, there aren’t many teams interested in him. The Seattle Seahawks could be an option, but other than that, Garoppolo is likely suited for a backup role wherever he goes next.

He's going to Seattle for a 3rd Round pick, That's my prediction. https://t.co/kCBTArjoV6

On the other hand, Garoppolo could just be released altogether. Who wants to trade for a veteran coming off surgery?

This is a poor move by the 49ers, and it basically shrinks Garoppolo’s value to nearly nothing.

After just about every team has found its quarterback already. Good job, Niners! https://t.co/6lwLDFbr39

Lol to where exactly? The Browns? In division Seahawks? https://t.co/iphTUEzJdq

Gonna be interesting to see what Jimmy G’s market is considering his contract but for a contending team with everything else fine around him he’d be solid https://t.co/XUdcXuj23v

Now that there’s no market for you, we’re happy to let you seek a trade” https://t.co/exyqQnwXJ4

Better late than never I guess! Can’t wait to see what we have with Trey. https://t.co/9X7uiJehOG

Now, one other option is the Cleveland Browns. Deshaun Watson is expected to be suspended for at least half the season. Do the Browns roll the dice on Garoppolo if that’s the case?

All in all, the 49ers allowing him to seek a trade this late is a poor choice by them, and Garoppolo can’t be happy.