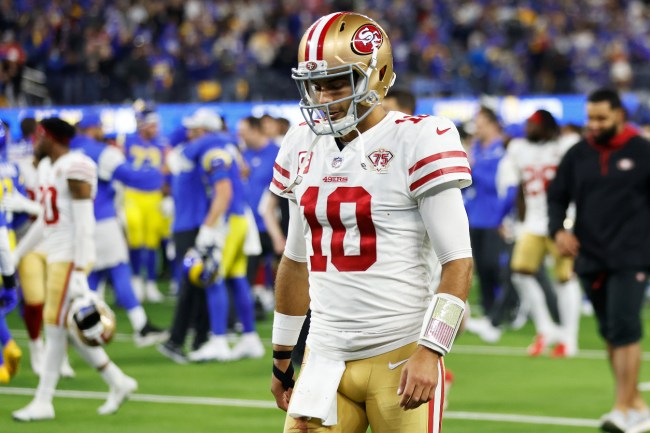 There you have it. Baker Mayfield is headed to the Carolina Panthers in a long-awaited trade with the Cleveland Browns.

So, what does this mean for San Francisco 49ers quarterback Jimmy Garoppolo? It means one less suitor.

Garoppolo has been a hot topic on the trade market, and the Panthers appeared to be the final viable suitor for the signal caller. Now, with Mayfield headed to Carolina, this hurts Garoppolo’s chances of going elsewhere anytime soon.

The last option looks to be the Browns, especially with a Deshaun Watson suspension likely on the way.

If Deshaun Watson is suspended for an extended period of time, the Browns should trade for Jimmy Garoppolo. No matter how you feel about Jimmy G, he is a proven winner for a roster ready to win now.

Apart from that, there aren’t any other options.

Ever since the Mayfield trade, Garoppolo memes, reactions, and gifs have been spiraling out of control on the internet. Here are some of the best we have found thus far.

Jimmy Garoppolo when he found out Baker Mayfield is going to the Panthers pic.twitter.com/8geDjSeq1Q

QBs getting traded and Jimmy Garoppolo is still on my roster pic.twitter.com/HA8DJLFE5g https://t.co/RrgTGkJfyk

No one wants Jimmy Garoppolo. Can we all agree? #49ers || #FTTB pic.twitter.com/rzfV1g3fdE

Never give up on your dreams, like getting a first-round pick for Jimmy Garoppolo.

The #49ers have traded QB Jimmy Garoppolo to the Saskatchewan Roughriders in exchange for a never ending supply of maple syrup, the rights to a Tim Horton’s expansion, and cash considerations. pic.twitter.com/FOTBKpmzz2

With the Browns as the final option (or so it seems), some reactions have also come from that.

It is not a good situation for Jimmy G. At this rate, the 49ers have a couple of options: Release him or keep him around as the backup to Trey Lance. But, who knows, maybe a trade suitor pops up out of nowhere.