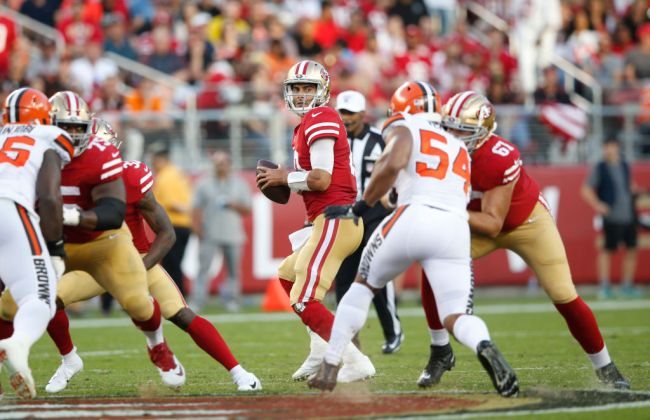 The 2022 NFL season starts in less than a month, and yet the Cleveland Browns quarterback situation is still very much up in the air.

The Browns signed Deshaun Watson to a massive fully-guaranteed contract back in March. Then the former Houston Texans QB was suspended for six games after 20+ women accused him of sexual assault or harassment. Now the NFL is appealing the ruling and pushing for a minimum yearlong suspension.

Jacoby Brissett is now starting, but it appears the Browns are only comfortable with him for Watson’s current suspension length. Should the NFL’s appeal go through, which many believe will, and Watson’s suspension is thus extended, the Browns will reportedly look elsewhere for their quarterback.

Sources told Mary Kay Cabot of cleveland.com that the Browns are considering acquiring none other than San Francisco 49ers’ Jimmy Garoppolo.

Following the 49ers’ loss in the NFC Championship last season, the team announced they would be moving on from Garoppolo. With several teams in need of a new QB1 and the former Patriots’ backup having a reputation for winning games, a trade seemed likely.

But Garapolo’s decision to undergo shoulder surgery in the offseason proved to be an obstacle. He’ll also earn nearly $25 million this coming season, which would push the 49ers past the salary cap. It seems the only team left with enough cap space to bring in Garappolo’s contract is the Browns.

With the Browns appearing as a last-minute trade destination, it could finally bring a positive end to the Garappolo saga.

We've been noting this for months now. Browns:
* Have cap space
* Have good roster
* Have questions at backup QB behind Watson
* Run offense similar to SF's
* Can offer Garoppolo chance to succeed before he hits FA in March.
— Q.E.D.

Jimmy Garoppolo threw for 3,810 yards and 20 touchdown passes last season, making it to the NFC Championship. As of now, he remains listed at the bottom of the 49ers’ depth chart. Clearly, the team has no plans to keep him once the season officially begins.

Since the NFL preseason has already begun, time is running out for the Browns to make a decision. If they want Garoppolo as their starter, they’ll have to act soon. Like, really soon.