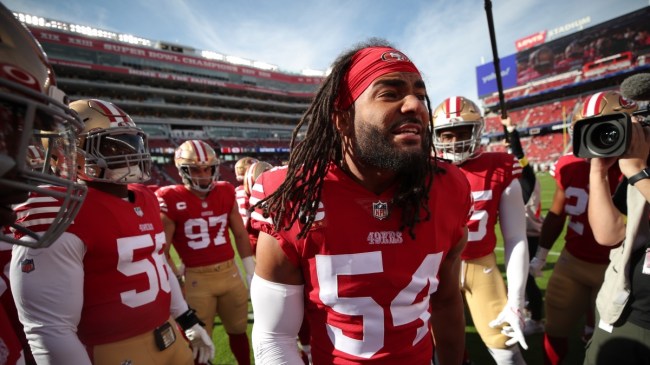 A season that was supposed to have Trey Lance as the starter and Jimmy Garoppolo as the backup for the San Francisco 49ers now involves neither one of them. Jimmy Garoppolo suffered a broken foot on Sunday and is out for the season.

And, that thrusts Mr. Irrelevant, Brock Purdy, into the starting job. Mr. Irrelevant is the title given to the last pick of the NFL draft each year. Purdy was the 262nd and final pick out of Iowa State in this year’s draft.

And, one of his teammates is already singing his praises.

After their win, all-pro linebacker Fred Warner made it seem like he was very confident about Brock Purdy.

Fred Warner on #49ers scout-team-QB-turned-starter Brock Purdy: "He’s played against the best defense in the league for the past 13 weeks. He’ll be fine."

And, he has a good point. He’s seen a great NFL defense multiple times a week. It’s not a game, but it has to help make him more prepared to start than other backups.

He might be on to something, as Purdy made some great reads and throws Sunday.

And, Kyle Shanahan’s offense is pretty quarterback-friendly. Purdy won’t be asked to have to carry things with a great run game and defense.

It would be quite the story if Purdy could lead the 8-4 49ers to the Super Bowl as Mr. Irrelevant.