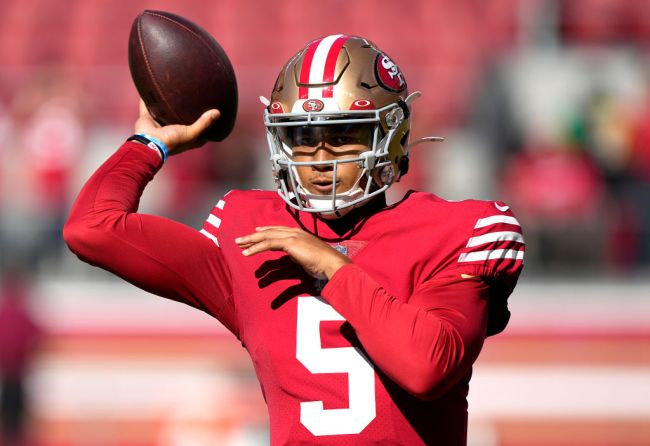 The 49ers’ offseason has been an interesting one, to say the least. Quarterback Jimmy Garoppolo was given permission to seek a trade, yet he still remains on the team as they enter their first preseason game. Superstar ‘wide back’ Deebo Samuel asked for a trade but ended up signing a massive extension instead.

And, of course, there’s the 49ers’ new starting quarterback Trey Lance. With very little film to show for in the NFL, questions have been swirling around the 3rd overall pick from 2021. Despite recent Josh Allen comparisons, Lance still had plenty to prove going into the season.

On Friday, the San Francisco 49ers met the Green Bay Packers for their first preseason game and Lance showed everyone why he’s worth the buzz. Late in the 1st quarter, on 3rd and 9, he lets it fly with an absolute dart for a 76-yard touchdown.

The deep throw put the 49ers up by 3 points and the Bay Area, or more appropriately Trey Area, was loving it. While Lance’s season debut would end there, as Nathan Sudfeld took over in the 2nd, fans had already seen enough.

From the endless Jimmy G comparisons to declaring the 49ers as Super Bowl LVII champs, it seems 49ers fans might be getting in over their heads based on one play. It was a pretty impressive play nonetheless.

Niners win the Super Bowl last year if Trey Lance was starting instead of Jimmy INTs.

It’s a preseason game at the end of the day, but it’s still a good sign for the 49ers and Trey Lance. He’ll be steadily improving with each snap he takes, so he’s already off to a great start. 49ers fans will hope this was just one of the many highlights that are yet to come this season.