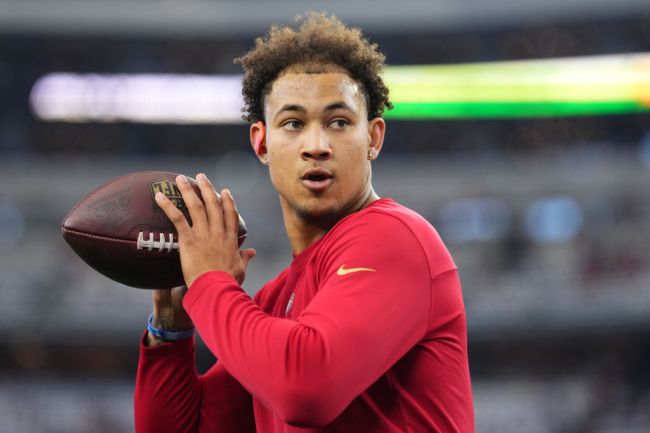 There are a lot of questions around Trey Lance going into the 2022 NFL season. But one teammate has shared very high praise for the 49ers’ new starting quarterback.

The San Francisco 49ers selected Trey Lance with the 3rd overall pick in the 2021 NFL draft. He served mainly as an understudy to Jimmy Garoppolo, only stepping onto the field a few times last season. But following the team’s NFC Championship loss, Lance was named as the starter moving forward.

While the Lance to Deebo connection is heating up, most are still unsure as to how much success the Niners will find. With the Cardinals, Rams, and Seahawks all adding new pieces in the off-season, the NFC West will be fiercely competitive.

However, some have more faith in the new quarterback than others, including 49ers’ wide receiver/returner Ray-Ray McCloud. Speaking to reporters on Tuesday, McCloud compared Lance to one of the best quarterbacks in the game right now.

“I came in with Josh Allen and the Bills and he gives me that same type of energy. That I’m ready to take the next step energy.”

McCloud was drafted by the Buffalo Bills in the sixth round of the 2018 NFL draft, which happens to be the same year Josh Allen was drafted.

The wide receiver/returner bounced around several teams before eventually joining the 49ers this off-season. And apparently, he’s already seeing some traits of his former quarterback in Trey Lance.

“Every day, (Lance is) getting better, learning how to be a leader,” McCloud explained. “Not even learning; he has it already. It’s a natural thing with him. Actually, I came in with Josh Allen and the Bills, and he gives me that same type of energy, that ‘I’m ready to take the next step’ energy.”

Is the Carolina Panthers quarterback competition already over? https://t.co/0E0WMwyDUx

Given Lance only started two NFL games last season, this is undoubtedly high praise. In comparison, Allen has led the Bills to three consecutive playoff appearances, even finishing second in MVP voting for the 2020 season.

Trey Lance still has plenty of time though. Allen didn’t actually become a star until his second season. Only time will tell if Lance lives up to the hype, but the 49ers Faithful should be excited nonetheless.