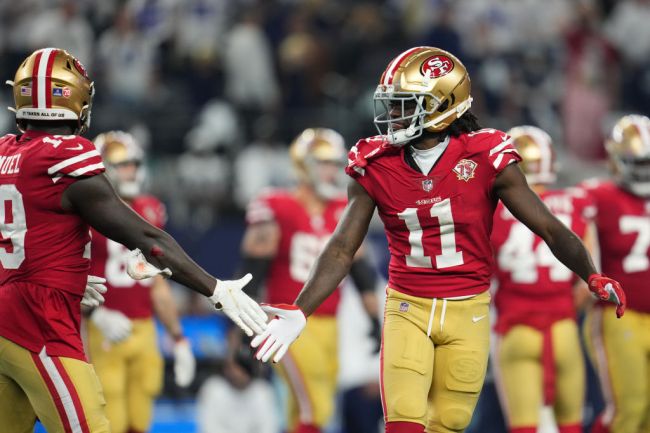 Brandon Aiyuk was front and center for the scuffle that broke out at 49ers training camp on Tuesday morning. And according to him, the California heat just might be the reason behind it all.

The San Francisco 49ers wide receiver has been at odds with teammate Fred Warner ever since training camp started. Things reached a tipping point at Tuesday’s practice leading to Aiyuk and Warner squaring up to fight after a series of scuffles.

Wow! Brandon Aiyuk just squared up to fight Fred Warner again and Kyle Shanahan has paused practice. Was ready to throw fists before the dog pile crashed on him

Training camp fights are a common occurrence, but Aiyuk chalked it up to the hot summer day during an interview with NFL Network.

If that’s what Aiyuk considers friendly training, NFL defenses better watch out this season. With superstar Deebo Samuel rejoining the team alongside George Kittle and Brandon Aiyuk, the 49ers’ offense is looking dangerous. As for the defense, they’ve been giving Trey Lance a tough time at practice so far.

“I mean, defense came out here with great intensity the past couple days, so you’ve got to wake the offense up one way or another,” Aiyuk explained. “Just a way to get practice going.”

Last week, Aiyuk called Warner “annoying on the field” after the All-Pro linebacker singled him out as a way of motivation. And it seems as if Aiyuk has taken some tips from his teammate’s tough love leadership style.

At least there’s no bad blood lingering. With a new quarterback at the helm, the 49ers need to focus on the season ahead and set all the distractions aside. That includes any near fist fights in practices, no matter how hot the California sun may be.