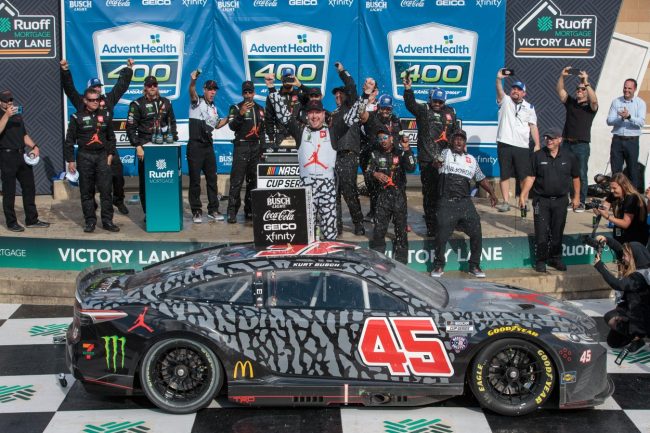 Things are going pretty well for Michael Jordan’s 23XI NASCAR team of late. Driver Kurt Busch picked up his first win for the team earlier this season to all-but lock himself into the NASCAR Cup Series playoffs. Teammate Bubba Wallace is in the midst of the best run of his career with four straight top-10 finishes, including three top-fives. And 23XI recently signed one of the sport’s top young talents, Tyler Reddick, to a contract beginning in 2024.

Jordan’s team made even more news on Wednesday morning when it revealed Busch’s incredible paint scheme for Sunday’s race at Richmond International Raceway.

The scheme is based on one of the Jordan brand’s most iconic sneakers, the Jordan XI Concord. MJ first wore the iconic sneaker in 1996, the first year after his initial comeback. A men’s size 10 of the OG 1995 version is currently worth over $1,900. The 1995-96 season was the fourth of Jordan’s six NBA championships and and NBA Finals MVP Awards.

The scheme is not the first iconic Jordan shoe look to grace one of his team’s cars. Earlier in the season, Busch won a race in Kansas while rocking the Air Jordan 3 Black Cement colorway.

Unfortunately, Busch may not be able to continue his winning ways in the unique scheme. The 23XI driver and former Cup Series champion has missed the last two races due to post-concussion symptoms suffered in qualifying crash at Pocono Raceway.

What is happening over at Alpine?!?! 👀https://t.co/idEFO6AJXS

Ty Gibbs, a 19-year-old who is one of the sports top prospects, has replaced him the last two races. If Gibbs wins he’d become the second-youngest winner in series history behind 2018 series champion Joey Logano.