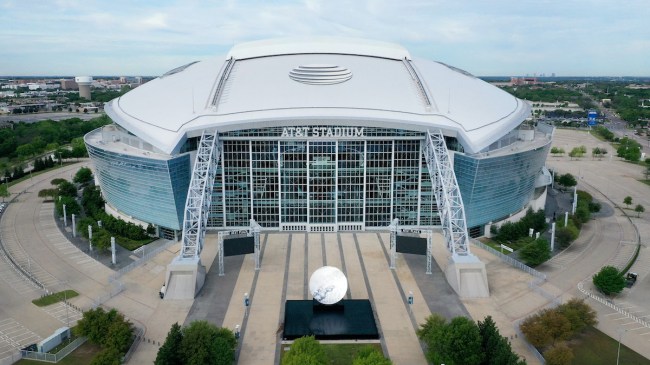 It appears a location has been selected for the 2026 World Cup finals, but it’s not the city fans might’ve expected.

The FIFA World Cup Qatar 2022 starts in less than a month. However, recent attention has instead centered on the one that’s still four years out. The 2026 World Cup will be jointly hosted by the United States, Canada, and Mexico.

FIFA previously announced the 16 host cities and it now appears they may have already decided on the location for the prestigious final match too. On Tuesday, ESPN’s Herculez Gomez and John Sutcliffe reported that the 2026 World Cup final will be held at AT&T Stadium in Arlington, Texas.

While fans might’ve expected Los Angeles or New York to host the finals, it seems that won’t be the case. So-Fi Stadium and Metlife Stadium were considered the front runners due to their proximity to the two most popular cities in the U.S.

Earlier matches will still take place at both stadiums, but fans certainly weren’t expecting this new report. That said, AT&T Stadium is an understandable choice to host the finals.

As home to the Dallas Cowboys, Jerry World is a top-class stadium with outstanding facilities. It seats 80,000 or 100,000 when reconfigured making it the largest NFL stadium by capacity.

Not to mention, its central location is optimal. Fans and teams wouldn’t need to travel as far for the tournament’s final match whether they’re coming from Canada, Mexico, or either of the coasts.

FIFA has yet to release an official announcement and likely won’t until after the 2022 World Cup has concluded. Even Dallas Mayor Eric has downplayed the reports, stating his office hadn’t received any final decision.

We don’t know of any final decision. But we are proud to have been named a World Cup host city, and we strongly believe Dallas is an ideal location for the World Cup final in 2026 and the International Broadcast Center. @fairparkdallas @visit_dallashttps://t.co/Nw5VVFEmMv

Ultimately, there’s still so much time until the 2026 World Cup. With the 2022 World Cup still yet to happen, there’s no need to get too ahead either.

Wherever FIFA decides the 2026 finals will take place, there’s no doubt it’ll be a memorable one. Maybe we’ll even get to see the USMNT compete there. One can only hope they make it that far!