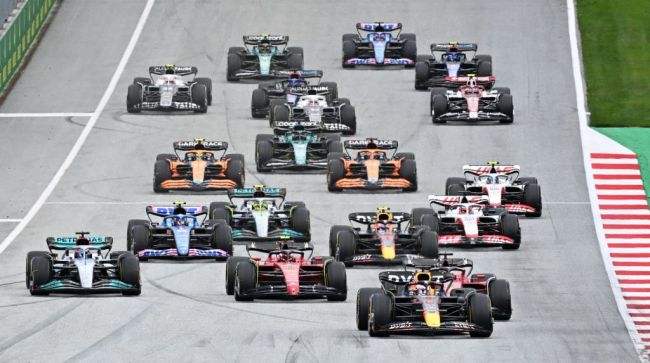 Only 11 races so far and the year has already delivered a number of memorable moments. New contenders challenged for the title, former champions faced new struggles, and one driver even hit an incredibly boss finger wag at over 200 mph.

With no race scheduled this weekend, it’s a great time for F1 fans to reflect on some of the most notable moments from the season. And as the official Formula One Twitter account pointed out, it’s been a year of many firsts in 2022.

Going back to the first race of the season, Alfa Romeo’s Zhou Guanyu delivered a superb debut drive to finish an impressive tenth in his first-ever F1 appearance.

The Alfa Romeo rookie started the Bahrain Grand Prix in 15th, but actually lost places and fell to 19th on the opening lap. Thanks to clever overtaking and a couple of DNFs, he came back and scored his first-ever F1 point.

With a growing popularity for F1 in the United States, 2022 added a new location to the race calendar: the first-ever Miami Grand Prix.

Transforming Hard Rock Stadium in Miami, Florida into a 5.412 km track, it was a race weekend to remember. From the man-made marina with fake water and a collection of yachts to the Pirelli football helmets for the podium finishers, there were plenty of firsts at the Miami GP.

Lights out and away we go in Miami for the first time! 🤩#MiamiGP #F1 pic.twitter.com/3yN6NLW66Q

Beyond the first poles and points, this F1 season also came with a first win.

Then, he took it a step further by taking home his first F1 race victory the following day. Coming out of the pits with fresher soft tires after a late safety car, Sainz was able to pass his Ferrari teammate to take first in his 150th F1 start.

The British Grand Prix wasn’t just a race of firsts for Carlos Sainz though. Haas rookie driver Mick Schumacher scored his first points, finishing in 8th place at the race.

The P8 finish earned Haas and Schumacher 4 points, in a race that saw early retirements from six drivers. Starting 19th on the grid, a crash at the start allowed Schumacher to make up crucial places along the way to his first-ever points finish.

It’s a race to the finish with only 11 races left.

It’s been a season of notable firsts so far and there’s still more to come. Maybe even Charles Leclerc’s first World Championship?